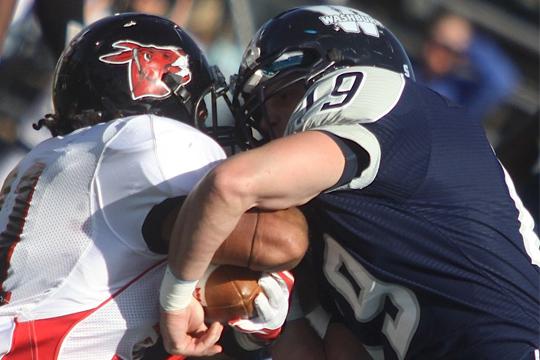 Home Sweet Home Washburn senior free safety Casey Curran makes a play during last Saturday’s game against the University of Central Missouri. Washburn lost to the Mules 39-21, dropping their second game of the year. Washburn still managed to qualify for post season play, earning an opening round match against Abilene Christian on Nov. 19.

It was all on the line this past Saturday for the Washburn Ichabods, who were in hot pursuit of clenching the No. 1 spot in the MIAA.

Although it was a sunny day, strong winds blew the Ichabods completely off balance as they were served their second defeat of the season, 39-21, by the University of Central Missouri Mules, who knocked WU out of first place contention.

“I think we’ll rebound well,” said Washburn head coach Craig Schurig. “We’ve done it before when we lost last time to Northwestern and we came right back and played well. Disappointed but it won’t last long because we have to get back to work tomorrow.”

The Mules started the game at their own 30-yard line, and marched deep into WU territory after a crucial fourth down conversion from the WU 27-yard line.

The following play advanced the Mules further after a holding penalty on Washburn senior free safety Casey Curran, placing UCM at the WU 18-yard line. Mules’ sophomore runningback Camren Torneden rushed for a total of eight yards in two plays to the WU three yard line. The Ichabods created a huge defensive wall, stuffing Torneden on a third and goal at the 1-yard line.

Confident in their offense, the Mules remained on the field for a fourth and goal. The risk proved successful, with a short run by UCM senior quarterback Tommy Corwin putting up the first points of the quarter. After the Mules’ kickoff, WU sophomore wide receiver Mark Fancher set up the offense with good field position after a 34-yard dash to the WU 42. The play was short-lived after a personal foul call on WU senior linebacker Zach Livingston.

After three plays of completed passes, the Ichabods seemed to have gained momentum until Washburn senior quarterback Dane Simoneau was sacked on a third down by UCM senior defensive end Sosaia Taufa.

In hopes of acquiring some type of rhythm, the offense went for it on fourth and long at the WU 40, but faltered after an incomplete pass to sophomore wide receiver Matt Kobbeman.

The failed play placed the Mules in position for another shot at the endzone. The finish of the drive ended in a 12-yard touchdown reception by UCM freshman running back LaVance Taylor, leaving the Mules with 14 unanswered points.

The Ichabods once again began their drive in great position at their own 44, which ended after a sack on Simoneau by UCM senior defensive lineman Brandon Tett for a loss of 10 yards, forcing another punt.

The WU defense slowly came to life, creating the first scoreless drive for the Mules, compliments of a joint sack by senior linebacker Michael Hollins and junior defensive lineman Jayveri Kelly for a loss of 4 yards.

The Ichabods’ next drive led to Simoneau’s first interception of the game, after a tipped ball by UCM sophomore defensive lineman Rico Wilson was intercepted by junior defensive end David Bax. The Ichabod defense had another opportunity to shoo the Mules off the field and succeeded after a forced fumble by Curran at the 1-yard line was recovered by WU freshman free safety Calvin Kenney out to the WU 5. Washburn retained possession at the closing of the first.

UCM’s drive began from its own 49-yard line, as the offense galloped down to the WU 5-yard line. Just when it appeared the Mules might score again, the WU defense crushed that attempt with a tipped ball and interception by Washburn junior defensive tackle Jake Cervantez.

The Ichabod offense repaid its defense with an 81-yard touchdown drive, ending in a 26-yard completion to sophomore wide receiver DeJuan Beard giving the Bods their first score of the contest. The Mules followed suit with a third touchdown after an 18-yard reception by senior wide receiver Jamar Howard, extending their lead 20-7 following a failed kick attempt by junior kicker Aaron Jamieson. The Ichabods fought to rally back before the half, but entered the locker room down by 13 points.

In the second half, the Mules came out in full force deep in their own territory from the 1-yard line, marching 99 yards for a score, after a 12-yard pass completion to junior tight end David Cannon hammered on to the lead, 27-7. The Ichabods breathed their second gasp of air after an almost silent first half, thanks to a 42-yard touchdown reception to Beard, his second of the day. The Mules’ offense was unmoved, as it charged 64 yards for a rushing touchdown by Torneden. Looking to tack on more points, the Mules readied themselves to execute a two-point conversion, but came up short when the pass was broken up by WU’s Kenney to end the third quarter.

Beginning at their own 1-yard line, the Ichabods marched to the 39-yard line, where Simoneau threw his second pick of the game, which was returned for a touchdown by junior defensive back Alexis Reedus. The extra point by UCM junior kicker Aaron Jamieson was ruled a miss after it took a bounce off an upright. The Ichabod offense mustered up its last scoring drive, after it was kept alive with a 17-yard completion by Beard on a fourth and 15. This allowed Simoneau to hook up with sophomore tight end Toré Hurst for a 7-yard touchdown reception, shortening the deficit to 18 points. The final drives of the game resulted in a punting fest by both teams.

Washburn had a total of 385 yards total offense and a meager 48 rushing yards. Simoneau, who was named MIAA Offensive Player of the Year Tuesday, went 29-for-50, throwing for 337 yards with three touchdowns and two interceptions. Beard, an MIAA second-teamer, had six catches for a game-high 103 yards with two touchdowns, while Ronnell Garner had seven receptions for 102 yards.

With the loss, the Ichabods (9-2, 7-2) are still playoff bound—for only the third time in school history—as the No. 3 seed in the region, but will miss out on the bye week awarded to the No. 2 team in the region, MIAA-champion PSU.

“I’m excited about the playoffs,” said senior linebacker Jahmil Taylor. “It’s another game, another opportunity. Our season is not over, but we have to come out this week, prepare hard and go far in the playoffs.”

WU hosts the No. 6-seeded Abilene Christian Wildcats (8-2, 7-1 in Lonestar Conference) Nov. 19 at 1 p.m. in the first round of the NCAA Division II playoffs at Yager Stadium. The winner will continue on to the second round Nov. 26 to face the Gorillas in Pittsburg, Kan.