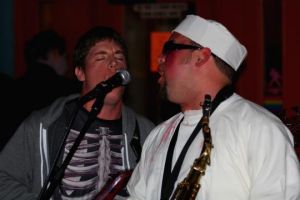 The costume party saw many unique costumes, including a bong/bag of weed couple, Mario and Luigi, a robot, a giant bunny rabbit and several women of the night. The band was also dressed up, with lead singer/acoustic guitarist David Hess dressed up as a giant chicken, saxophonist T.C. Gomez dressed up as post-mortem Libyan dictator Muammar Gaddafi, lead guitarist Michael Spangler dressed as the Big Bad Wolf, drummer Matt Mirsch dressed up as the Easter Bunny and bassist Scott Stormann as a skeleton.

Echo Lake played several songs off its album, “3445 B,” as well as cover songs such as the “Ghostbusters” theme song, “Santeria” by Sublime and “Beer” by Reel Big Fish. They also introduced a debuted a new original song. Aside from that, the show gave the band an excuse to get dressed up.