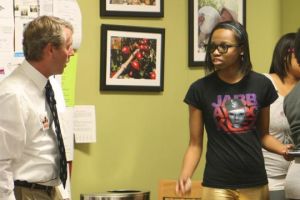 Singing, lip syncing, dancing, speaking, clapping along and laughing were all a part of Wednesday night’s “Don’t Fear the Mic.”

The Mabee Library sponsored and hosted the event as a part of Washburns “Fear the Bod” homecoming week.

“Ever since we got the coffee shop in the library, we knew we wanted to do some sort of entertainment in the library,”  said Lori Rognlie library assistant.  “Homecoming just presented itself for us to actually do it.”

There were 11 different acts from students, along with jokes from the emcee, and a few guest performances.

“There are a lot of very talented students,” said Sean Bird, information literacy librarian and emcee of Don’t Fear the Mic. “I know that we have students that are great performers, great speakers, and great musicians. We saw a very wide range of them tonight.”

Washburn professor Sharon Sullivan, Washburn baseball head coach,Steve Anson, and Chris Fisher made up the panel of the judges for the event.

Delaney Fish was the third performer, playing guitar and singing “Still Alive.” The song was written by Jonathan Coulton and performed by Ellen McLain for video game Portal.

Senior Nick Arnold was ready to step up to the mic soon after.  He performed his own song entitled “Fading Bliss.” Arnold represented Kappa Sigma.

Alex Joslin was next to perform, playing guitar and singing to Jason Mraz’s “I’m Yours.” Joslin encouraged the audience to clap along with the beat. Joslin represented Phi Delta Theta.

Michael Laughlin then played guitar and sang “You Will Never Be” by Julia Sheer.

As the evening was nearing a close, Anjelica Willis sang “Ave Maria.”

The final performance by contestants for the evening was a lip sync and dance performance of Kanye West’s “The New Workout.” Porchia Brown and Nikki Scott represented the Black Student Union.

In between performances, the crowd was greeted by guest performances as well.  A therapy dog and trainer came to demonstrate their wide receiving, tight end, and cheerleading skills.  The Ichabod paid a visit, dancing to Michael Jackson’s “The Thriller.” A former student also showed off his juggling skills with basketballs.

After the last contestants performed, the judges left the room to make their decisions for winners of the event.  Bird took a moment to thank everyone who helped with the event, provided Halloween jokes, as he did all evening. He then decided to treat the audience to playing the guitar and singing until the judges arrived with their decisions.

Lake was awarded third place and a gift card from the Washburn University bookstore.

The winner of a first place plaque and the ViewSonic tablet was Pingleton.

“I think the thing that I liked the most about it is that it involves students that probably wouldn’t be involved in other homecoming activities,” said Rognlie. “I think we might just do this again next year.”