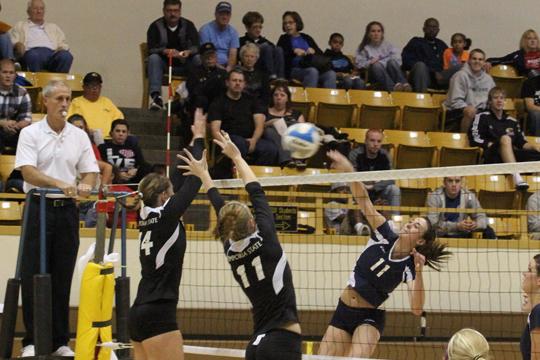 The Washburn Lady Blues volleyball team went 1-1 over the weekend to claim a share of the MIAA title for the second straight year.

Last Friday, the Lady Blues traveled to Warrensburg, Mo., to take on the University of Central Missouri Jennies. With WU sitting at a perfect conference record and UCM only losing one conference game, which was against the Lady Blues, it was bound to be an exciting game.

Jumping up to an early 5-1 lead, it seemed the Lady Blues were fired up and ready to win. However, with massive runs by the Jennies, the Lady Blues fell in the first set 25-16.

The second set seemed steadily close as the Lady Blues were only down 17-16. They went on a 6-2 run and seemed as though they would take the set. However, after a timeout by UCM, the Jennies scored six out of the next seven to crush the high spirits of the Lady Blues and took the set 25-23.

Washburn tried to return after the break with a fierce intensity and even led 5-1 and 11-7 at different times. When tied at 13 though, the Lady Blues gave up a large 5-1 run to give up the lead and all of the momentum as they were never able to regain the lead as they lost 22-25.

This was only the second loss of the season and the first sweep the Blues. This ended a 22-game winning streak and a 25-game MIAA winning streak dating back to last year.

It also set up an added intense factor to the next day’s game against Emporia State University, which gave Washburn the chance to clinch at least a share in the MIAA title.

Endurance had little factor at the beginning of set one as the Lady Blues jumped up to an early 5-0 lead. With the early lead, they never gave up the lead, eventually winning set one 25-20.

The second set was a different story as there were eight different ties before either team got to 10 points. With an overall 13 ties, it was close until a 5-0 run by WU gave them a 19-14 lead. It got within one point at 23-22 but two kills in a row finished the second set 25-22.

The third set saw the exhaustion kick in as the Lady Hornets took control. Through the play of Emporia and the mistakes of Washburn, the Lady Blues dropped it 25-18.

However, if anybody thought endurance would continue to be a problem would have never expected what happened in set four.

With back and forth action, it seemed as though Emporia would take the set as they reached set point at 24-22. On the contrary, Washburn connected with two kills and an ace to get within match point. From there, it went 1-1 for nine different points.

The Hornets had set point in sight four different times while the Lady Blues saw it twice themselves.

It was not until Jessica Kopp put down two kills in a row that finally finished the match 35-33.

This gave the Washburn Lady Blues a share of the MIAA title since Central Missouri won that same night. But, this setup for some controversy as to who would host regionals since both teams had the same conference records.

“It was crazy, just crazy.” said Chris Herron, Washburn head coach. “We had some great points and some boneheaded points in that first set.”

Because of some criteria, the  Lady Blues were unable to achieve the number one ranking and will now be traveling to Warrensburg to play in the regional tournament at the University of Central Missouri as the No. 2 seed. Their first game will be Thursday vs. Arkansas Tech.