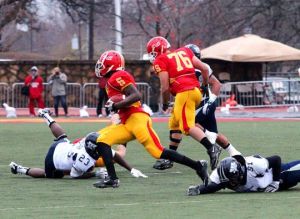 Washburn looked to blaze new ground as they entered the second round of the playoffs against conference rival Pittsburg State. The Ichabod playoff run ended however as the Gorilla running attack went bananas.

Coming into the game, Washburn had just barely held off Abilene Christian the week before. With a familiar opponent on the horizon, the Ichabods came into familiar surroundings, having beaten Pitt State during the regular season.

“They are a much better team than we saw a year ago,” said head coach Craig Schurig. “In terms of team speed they are a very competitive team that we knew were going to be tough.”

Early on in the game Washburn seemingly had possession of the momentum in the contest, getting a safety off of an over snapped punt by PSU. With a two point lead and favorable field position in the ensuing drive, the Ichabods were able to move down the field methodically on the arm of senior quarterback Dane Simoneau. The drive culminated with a 17 yard touchdown pass to sophomore wide receiver Matt Kobbeman taking the score to 9-0 after the end of the first quarter.

The second quarter PSU was able to turn back momentum on their side as quarterback Zac Dickey was able to complete a couple of passes, including a 32 yard pass moving the ball down the field, while keeping the Washburn defense off balance with quarterback scrambles of 3 and 14 yards on the way to a Gorilla touchdown to get on the board, making the score 9-7.

“Give Pitt State credit,” said Schurig. “They were able to weather the storm and get momentum going on their end.”

After a short drive by Washburn, PSU again took over and began moving the ball down the field before defensive pressure got to Dickey, forcing him to throw an interception which sophomore linebacker Bryce Atagi returned 50 yards for a touchdown to push the score to 16-7.

Two out of the next three possessions for PSU however would result in touchdowns, giving PSU the lead 21-16 going into the locker room at the half.

In the third quarter it was all Pitt State as the Gorillas chewed up the clock, holding the ball for just over 11 minutes in one drive, which resulted in a PSU field goal taking the score to 24-16. Washburn, unable to move the ball on the ground in the second half was unable to sustain drives of more than 90 seconds the entire quarter.

In the fourth quarter the game came down to one play. With the ball on the one yard line, Washburn knocked on the door but were unable to come in as Pitt State’s defense stood tall and stoned the vaunted Washburn offense on four straight plays, ending with a Simoneau incompletion thrown under duress.

The Gorillas responded, taking the ball 97 yards on just seven plays down the field for yet another PSU touchdown. With the score 31-16, Washburn went into desperation mode as they attempted to claw their way back into the game. However, two plays later, Washburn once again was denied as Simoneau threw his only interception of the day, effectively ending any chance for the Ichabods to come back.

Washburn was still able to get one more score before the end of game however missing the extra point keeping the game at two possessions and pushing the score to 31-22.

With the ball in hand, PSU killed out the rest of the clock, ending Washburn’s season in the second round of the NCAA tournament.