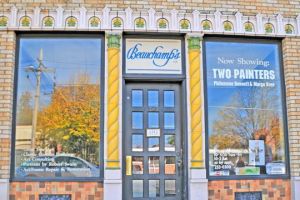 The show took place at Beauchamp’s, located in the Westboro Shopping Center, on Nov. 4.

The display of Sudlow’s work, entitled “Landscapes and Surprises,” is one of the art gallery’s annual events, which will run until the end of December. The display has been a tradition of Beauchamp’s for more than 40 years. The opening show on Friday attracted many collectors, art lovers and people from all walks of life.

Robert Sudlow was born and raised in Holton, Kan., graduated from the University of Kansas and flew sea planes for the Navy in World War II. His work, which was predominately landscape paintings, received praise and notoriety throughout his career. Sudlow died in March 2010 at the age of 90.

“Sudlow is an icon of Kansas painting,” said Bob Swain, who owns Beauchamp’s Art Gallery with his wife. Swain, who has known Robert Sudlow personally since he had him as a teacher in the early ‘80s, said that he felt Sudlow’s work was “…beyond words.”

“It exudes a feeling of what it means to be in the prairie,” said Sudlow.

While Sudlow’s work might be a little pricey, it’s for good reason. Swain explained that if there is snow in the painting, then Sudlow was standing out in the snow painting it in real life. Sudlow would stand out in the bitter cold, using vodka to thin his freezing paint, and paint the landscape that was right before his eyes. Swain said Sudlow would purposely put himself in these environments and nature would reveal itself to him in almost a spiritual sort of way.

Swain said Sudlow’s work was very influential to numerous painters, including David Hartley, adjunct instructor for Washburn University’s art department. Hartley also had Sudlow as an art teacher at the University of Kansas and explained that after taking just one of his classes, he knew that he wanted to paint landscapes.

“Bob [Sudlow] gave me what it means to connect with a subject…attachment you have with something,” said Hartley.

According to Hartley, Sudlow was liked by everybody and treated everyone like a friend. He was always positive and enthusiastic and had a real sunny personality. He made people feel good and in turn, people wanted to be around him. Hartley also said Sudlow was critical, but in very positive ways.

“You even felt good about making a mistake,” said Hartley.

What Hartley said he likes about Sudlow’s work is the variety and how he was able to deal with landscape and not be entrenched with only one view.

“There was nothing that he didn’t engage,” said Hartley.