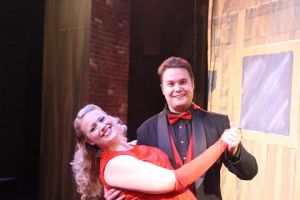 The Helen Hocker Theater is no more than a three minute drive from my house, but I had never been there until recently.

The small theater made for a cozy environment, where I didn’t feel like just one in the crowd, but almost a part of the experience, especially sitting in the front row.

“Crazy for You” is a musical comedy by Ken Ludwig, based off of  George and Ira Gershwin‘s “Girl Crazy.” The story behind the musical focuses on the character Bobby Child.

Child has dreams of becoming a performer at the Zangler Theater in New York.  His mother doesn’t share his dream, however, and wants him to work for the family business.  He is assigned to go out of state and foreclose on a theater.

When arriving in Nevada, Child meets a few cowboys and later his love interest, Polly.  Polly turns out to be the daughter of the owner of the theater Child is there to foreclose on.  Child offers to save the theater, but Polly is upset that he’s with the bank, thus, initiating the conflict throughout the play.

I enjoyed many aspects of the musical. The singing and dancing is obvious, but the most notable for me was the adult humor. Impersonations, liquor and cowboys were just a few of the funny elements.

The props were used well and were believable for the most part. I blinked a few times with the use of the fake pistols.

While individual performances were good, it was the group performances that got you your money’s worth.  “Slap that Bass” and “Shall We Dance” were a couple of my favorites.

The actors made up a great atmosphere, staying invested in their performances and not breaking character.

A recurring theme of the play was “who could ask for anything more?” At the end of the performance, I was left thinking the same thing.