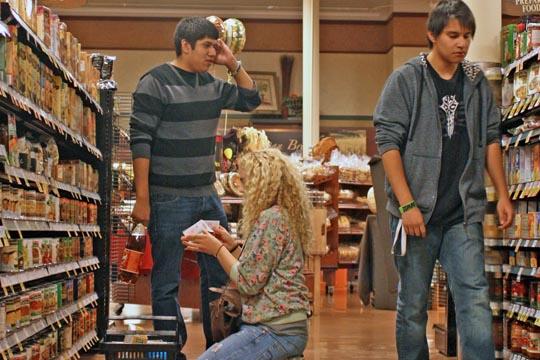 Bargain Shopping Shopping for Thanksgiving can be pricey, but great deals can be found around this time of year. Washburn students have different plans this year that don’t include traditional pumpkin pie and turkey.

The holidays are nearly here and beyond all else that means one thing—the unnecessarily massive consumption of food.

Many students head home for the holidays to enjoy the company of family and hometown friends, but some are unable to make the trip. Long drives or other obligations sometimes can make those reunions implausible.

“I have usually gone home to eat with my family, so this is the first year I have to worry about it myself,” said Washburn student Jordan Duncan. “I personally have to work and my boyfriend is going to try to make us a Thanksgiving dinner.”

Students who aren’t going home for the holidays are tasked with the responsibility of creating their own version of the holiday. Celebrating Thanksgiving as an adult gives students the independence to create new traditions.

“As long as it is special and includes friends and family it’s Thanksgiving, no matter what is really on the table,” said Duncan.

Any excuse to get away from school for a few days to spend time with friends and family is a holiday worth celebrating, but the history behind Thanksgiving holds controversy.

Depictions of the relations between peaceful Native Americans and beneficent European settlers can be misleading. The conquest and genocide of the Native American peoples is usually omitted from the happy images of pilgrims eating turkey.

Washburn student Kristen Danielle said that she participates in the holiday as a celebration of family and being thankful, but doesn’t agree with the history behind it.

“I’m Hawaiian, and the white people came to our land too, took our land and imprisoned our queen and killed anyone who tried to go a different direction than what they wanted,” said Washburn student, Kristen Danielle. “They did the same with Native Americans. I don’t appreciate that.”

Alternatives to the traditional holiday vary widely. When asked what their plans were, students responded with such non-traditional answers ,such as eating Chinese food, Taco Bell, sushi, popcorn and a movie, or going to the local bar, the Boobie Trap, for a pot luck and weekly Resistance dance night.

More traditional dinners can be a welcome respite for those who feel homesick due to the separation from family or for students who simply enjoy the food.

A good idea is to stock up on things when they go on sale, and during the holiday season, most stores provide sales on popular seasonal recipes.

Gathering with friends and designating each person to bring a different dish saves money but doesn’t neccessarily cost anyone a ton of money.