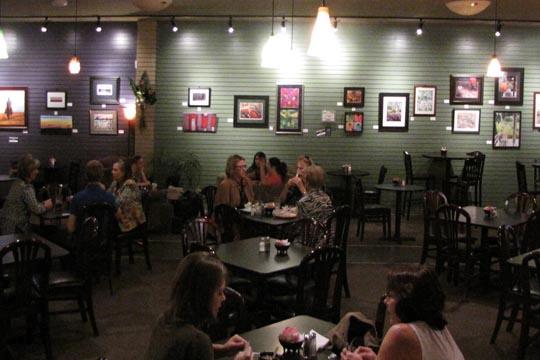 Local Collaborative Art Artist work with one another to create the masterpieces that consist of the “Inspirations” art exhibit at the Fairlawn Plaza Classic Bean. Painters and photographers were challenged to use each others work to create their own works of art.

A unique exhibit combining art and photography is currently on display at the Fairlawn Plaza Classic Bean at 2125 S.W. Fairlawn Drive. “Inspirations” allows patrons to view artwork and the photograph that inspired it hanging side by side.

“We have 14 artists this year, including myself,” said Patterson, who graduated from Fort Hays State University with a Bachelor of Fine Arts in graphic design. “We have five photographers, and the rest are painters and then Ruth Powers, who does textile fiber art.”

The idea came to Patterson after she created a digital art piece from a photograph she had taken with a butterfly. Although she has artists collaborate with a photographer other than themselves for the Inspirations exhibit, this work of art that started it all can be seen on display in the meeting room at the Fairlawn Plaza Classic Bean. Patterson explained how the idea evolved.

“Before I knew any painters or photographers personally in this town, I was doing my own thing,” said Patterson, who moved to the Topeka area with her husband in 1997. “I created my own art from my original photograph. I always thought this would be interesting to see them both hanging side by side. I thought for the viewer to be able to walk around and see the photograph and the painting hanging side by side, they could truly see what inspired the painting.”

The idea became a networking opportunity for artists and photographers around the community because of Patterson’s idea to not have artists work off their own personal photographs or photographers paint renditions of their photos.

“Painters work from their photographs all the time,” said Patterson. “I, as a photographer, could do a watercolor rendition of any of my photographs I have taken over the years. It’s going outside of your own personal collection, and having the permission from the photographer to allow the painter to do it; marrying them together, so to say.”

The photographers for the 2011 “Inspirations” show are: Charles Benton, Northwind Image, Bob Hayes, Leslie Richards and Patterson.  Patterson also contributed a watercolor piece for the exhibit, along with her photography and the digital piece that sparked her idea.  Other painters for the show are: Naomi Cashman, Kathleen Cobb, Becky Drager, Connie English, Betty Fox, Dorethy Hancock, Angela Lexow and Cynthia Stotlar. Ruth Powers is a textile fiber artist.

Powers is nationally known and has a blog about her artwork, www.ruthpowersartquilts.com.

Patterson has a website for her independent graphic design business, photography and other artwork, www.tscpgraphics.com. TSCPGraphics can also be found on Facebook. Patterson can be contacted through her website.

“If individuals are interested in participating, I am interested in receiving portfolios or being contacted, through email,” said Patterson. “We are interested in expanding “Inspirations” to other venues, as well as the Classic Bean. Once we have the venues available, we are definitely interested in getting more artists involved. I think it would be great to see how far Inspirations can go.”

Doug Thomas is the manager of the downtown Classic Bean and decides what art goes on display at both stores. He is enthusiastic about “Inspirations.”

“It was Tammy’s idea, and I think she has a great idea to pair an artist and a photographer side by side,” said Thomas.  “I know Tammy wants to expand and I think it’s a great idea. It seems like there is more and more people who want to participate in the pairing.”

Currently on display downtown is watercolor on silks created by Diane Lawrence and her art students. “Inspirations” and the exhibit downtown will be on display until the first of the year.

Visitors to “Inspirations” can vote for their favorite photography and artwork pairing. This voting opportunity is called “People’s Choice.” The results will be posted and ribbons awarded to winners on Dec. 16.