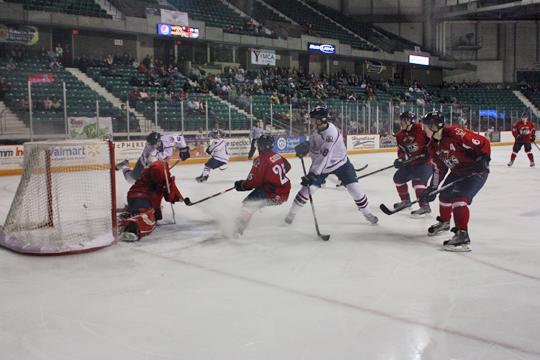 It looked promising for the Topeka RoadRunners Saturday night. They scored early and held a lead through two periods.

Aided by two goals from forward Greg Gibson, the Amarillo Bulls erased a 2-1 deficit going into the final period of play as they defeated the RoadRunners 4-2 at Landon Arena.

“It’s the small details of our game that are costing us,” said Scott Langer, Topeka head coach. “If we come out with a 2-1 lead, playing RoadRunner hockey means that the game should be over in the third period.”

Halfway through the first period on Saturday, forward Ryan Doucet gave Topeka a 1-0 advantage when he fired a shot past Amarillo goaltender Gregg Gruehl. At 15:08, forward Dan Dupell made it a 2-0 lead. Just a minute and 34 seconds later, Amarillo forward Brooks Behling cut the lead in half, making it 2-1 at the first intermission.

The second period, much like Friday night, held plenty of opportunities for the RoadRunners. But they were unable to cash in. Amarillo had a chance to tie it roughly five minutes into the period on a breakaway, but Topeka goaltender Peter Traber made a glove save to preserve the lead.

Langer said Traber’s play was one of the positive points of Saturday’s contest.

“It was promising to see the way Peter Traber played tonight,” said Langer. “He gave us a chance to win that game.”

In the third period, Gibson’s first goal came at 2:28 to tie the contest. It was not until late in the period, at 18:14, that Amarillo would score again. Gibson grabbed a rebound off a shot by forward Tyler Deresky and fired it past Traber. An emptynet goal by Behling at 19:01 sealed the victory.

Despite the loss, Langer was quick to point out how banged up his young team is and how early in the season it is.

“We’ve got a lot of guys out of this lineup right now,” said Langer. “They’re good hockey players when you start looking at their numbers in the past. We’re going to just have to continue and try to pluck some points away and wait for these guys to get back in the lineup.

“We’ll be a force to reckon with down the stretch. We just have to stay in a position to make the playoffs right now.”

Topeka now travels to Corpus Christi, Tex. to face the Ice Rays next Friday and Saturday.

Following those games, they return home Dec. 9-10 to face the Wichita Falls Wildcats. Those games begin an eight-game homestand for the RoadRunners.