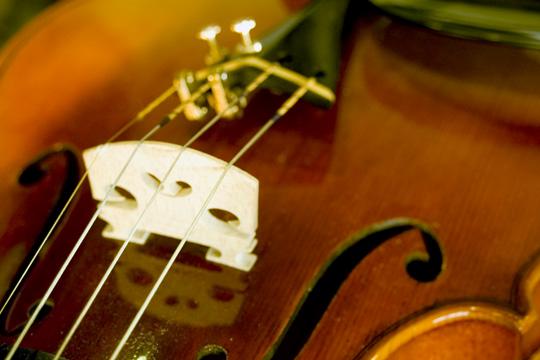 Christopher Kelts, the music director, began the evening with a small introductory speech about his self-professed strong personal feelings about self discipline and all it does to help cement a successful career in music. He led a round of applause for the guests who were playing in the orchestra that night, the Washburn Rural Strings. They included Kenya Patzer and Carol Chatelain on Violin I, Robin Onikul on Violin II, Kim Krutz and Jodie Lin on Bassoon, and Elizabeth Dunning and Andrew Johnson on Horn. Kelts congratulated them as well as their own music director, David Ohse, who stood up and took a round of applause for his direction with his orchestra at the high school.

The first piece, Pavane by Gabriel Fauré(1845-1924) offered a soft and delicate opening with an ominous middle and striking flute solo. Up next was Mozart’s (1756-1791) Symphony No.25, G Minor, KV183, with his usual dash of humor and immediate immersion of emotion in his Allegro con brio. Next was the Andante with its slow slide into joy and teasing sadness, continuing with the Minuetto, which alternated between severe, playful and returning to severe again. The Allegro and ending piece played between ecstasy and somberness. Mozart’s symphony was clearly a musical work out and the Orchestra executed it rather nicely, with plenty of feeling and passion.

During intermission, Rachael Johnson, oboist and art education major with a minor in music at Washburn University, hurried out to talk about her part in the orchestra. As she is of junior standing and has played Oboe with the Orchestra since she first came to Washburn, this is her third year with them. She says she practices several times with the group and also on her own throughout the week.

“I find it to be a very enriching experience,” she says of her participation in the group. Johnson had good things to say about the music director, Kelts, too, and comments about how the pieces he picks are familiar but challenging. Her favorite piece that night was Felix Mendelssohn’s (1809-1847) Die Hebrides overture “Fingal’s Cave”.

“It’s very picturesque,” said Johnson, before leaving again to start the second part of the show.

And Mendelssohn’s piece was in fact that. It started simply enough with a march-type beat, sedating the audience in its rhythm and structure. The middle became very intense and alive, making the piece complicated and beautiful. The strings worked wonderfully with the woodwinds, who worked side by side with the brass, all in all executing an emotional and complex rendering. It was by far the best executed piece and the pivotal moment of the show, where all the musicians got to show off a little of their skill in being able to work together as well as play individually.

After the show, Cameron Wright, a Washburn Student majoring in Art said the music “gave you an opportunity to sit and let go while listening to a beautiful performance,” and thanked the Washburn University Symphony Orchestra and their guest musicians from Washburn Rural High School, because it was just that.