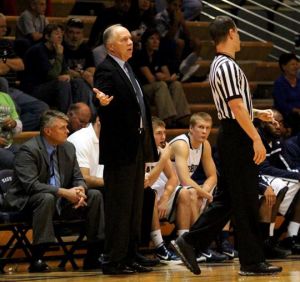 Black Friday is typically associated with insane crowds jostling for position to get the best deal. In what was a two-for-one special, Washburn earned their second straight home win while getting head coach Bob Chipman career win 700.

Coming into the game, Washburn had dispatched their previous opponent, Peru State 97-72, with an improved shooting performance over their previous outings. Hoping to get out to another positive start, Washburn put the ball in the reliable hands of sophomore forward Alex North and junior guard Will McNeill who finished with 21 and 22 points respectively. Chipman praised his players for their performance afterwards.

“They are just a fun bunch of guys to be around,” said Chipman. “In all the years I’ve coached, this is one of the top groups that I’ve just enjoyed being around and watching them play. They have a lot of fun out there and it shows.”

With added incentive to get Chipman a historic mark of 700 wins, the Ichabods came out on fire shooting 54 percent in the first half from the floor. In particular, North finished a perfect 7-7 from the floor, allowing Washburn to keep Newman from getting into transition. Newman as a result ran into the teeth of a Washburn defense that was on point, forcing 17 turnovers in the game, scoring 21 points off of Jet mistakes.

“We did a lot of good things on the defensive side to keep them from breaking out,” said Chipman. “I thought we were as strong defensively as we have been all year.”

Newman, faced with a large deficit, seemed to lose their composure at points throughout the game. With hard physical play by both teams, the personal fouls started to pile up as Newman sent Washburn to the line 30 times, going 19-30, while Newman would visit the charity stripe, shooting 16-20 as well. In addition to the large amount of fouls whistled, Newman head coach Mark Potter drew the single technical foul of the afternoon for protesting vehemently over calls in the second half. Potter was joined by Newman guard Bobby Wesley for above and beyond foul calls when Wesley was called for an intentional foul late in the game. The physical nature of game was something that Washburn knew might happen coming in.

“We knew that they were going to be a tough team that wouldn’t back down,” said North. “They are a pretty good team that just got taken out of what they do well.”

After the game, Chipman reflected on 700 wins and the accomplishment.

“You never remember the wins,” said Chipman when asked about his first win at Washburn in 1979. “I can remember the first time we lost against Emporia State, up 18 with 14 to play. Those are the things that stick with you. Its great to win but the losses are what you remember the most.”

With just 290 career losses, Chipman gave credit to his coaching staff and the players that have come through the Ichabod program in his 33 years at Washburn.

“I’ve had a lot of great kids come through that have made this so much fun,” said Chipman. “This group in particular this year has been just a lot of fun to be around and makes this season so much easier than previous years.”

Washburn now looks forward to a matchup against 1-3 University of Nebraska-Omaha. The Mavs are currently on a three game losing streak and are looking to rebound against Washburn in what will be their final year in the MIAA conference. The game will start at 7 p.m. Nov. 29 in Omaha, Neb.