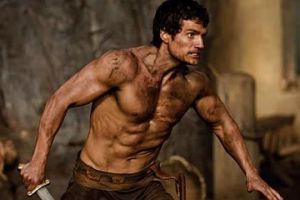 When I watched “Immortals” this weekend, I felt rather frustrated; the theater was very full at the time and by the climax, I was struggling to restrain my laughter and incur the scorn of all the other, less-cynical moviegoers.

“Immortals” is essentially a nothing of a film trying to ride the coattails of big-budget action movies set in Ancient Greece like “300” and “Clash of the Titans,” where greased-up shirtless guys kill things in slow motion. Do not get me wrong, I can get behind the heavy use of violence that has been stylized and glorified for our entertainment in a good movie, but in a movie like “Immortals,” the artistic air purifier fails to filter the goriness and the stink of viscera makes the film that much fouler.

The plot is almost an outright mix between the original “Clash of the Titans” and its remake, with a few scenes from “300” peppered over it. A mortal man (with a moral fear of wearing a shirt) is chosen by the gods to defend the world against an evil force. In this particular incarnation, we have Theseus (Henry Cavill), a bastard child with a distaste for oppression and an inexplicable penchant for twenty-first century fighting styles, against King Hyperion (Mickey Rourke), also a bastard child with an explicable yet disturbing penchant for murdering pregnant women and castrating his soldiers. For a love interest, they have the seer/oracle/psychic/plot device named Phaedrea (Freida Pinto), who will lose her power if she has sex (see also: Kelly Hu as the sorceress in “The Scorpion King.”)

Still, what really pushed this film from ‘stale’ to ‘laughable’ was the gods. Not since cartoons in the ‘90s have the Greek gods been depicted so embarrassingly and so inaccurately. To begin with, Athena (Isabel Lucas), the goddess of wisdom, strength, courage, war, etc., is depicted as a dainty daddy’s-girl and Zeus is insistent that he and the other gods not interfere with humans. What is more, all of the gods (although there are only a handful in this movie) are depicted by barely-legal models in gold capes and revealing gold skirts, none of which reach even halfway down their thighs. To add insult to embarrassment, these boy-toys (and Athena) are all wearing absolutely ridiculous hats/helmets. When they finally do fight, their action sequences play pretty cartoonish.

Honestly, I could go on and on about the dozens of little things in this movie worthy of mockery. I could question why Phaedrea’s only clothes were spotless minutes after she jumped into a tar pit. I could point out that when Theseus stood above the doorway spouting rhetoric to his army, they could all see directly up his skirt. I could point out the truly inconceivably absurd premise that the lost mystical bow everyone was looking for was buried in a mind-bogglingly conspicuous rock formation, jutting out from the wall of the mausoleum/temple that was made of a completely different colored and textured stone in Theseus’s home village. NOBODY noticed when walking through it every day, but if I listed all the problems with “Immortals,” the article would simply be too large to fit in the paper.