No. 4 Lady Blues fall on the road to No. 7 University of Central Missouri 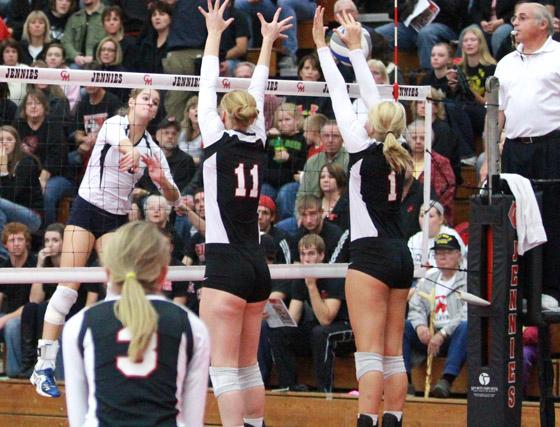 Junior outside hitter Hillary Hughes attacks against the University of Central Missouri Jennies Friday night. Washburn lost to UCM 3-0, losing their first game of the year in MIAA play. The Lady Blues move to 29-2 overall and 16-1 in conference play.

Warrensburg, Mo.- The No. 4 Washburn Lady Blues took their undefeated conference record into hostile territory Friday night. Dealing the No. 7 University of Central Missouri Jennies a blow in the conference standings proved easier said than done as the Lady Blues fell in straight sets 3-0.

In the first set of the match Washburn came out strong jumping out to a 5-1 lead behind the early efforts of senior right side hitter Breanna Lewis who finished the match with 12 kills. The Jennies responded, coming back on on a 5-1 run of their own to take back the lead. With standout performances by UCM right side hitter Allie Huffman and middle hitter Paula Harris, finishing with 13 and 12 kills respectively, the Jennies ran away with first set 25-16.

The second frame Washurn fought back in a hotly contested set. With neither team able to break away at any point, the set featured 15 ties and 8 lead changes. The Lady Blues were unable to overcome mistakes at key points throughout the set and game, finishing up tonight’s action with 18 errors. The second set ended up 25-23.

The final set of the night featured more of UCM’s outstanding duo in Huffman and Harris as both scored key points and defended blocks to keep the Lady Blues off balance the entire night. UCM went on back-to-back 4 point runs to put distance between themselves and WU en route to a 25-22 set win, holding off a late charge by Washburn.

Washburn travels on the road next to Emporia, Kan. to take on the Emporia State Lady Hornets Nov. 12, 7 p.m. at White Auditorium.