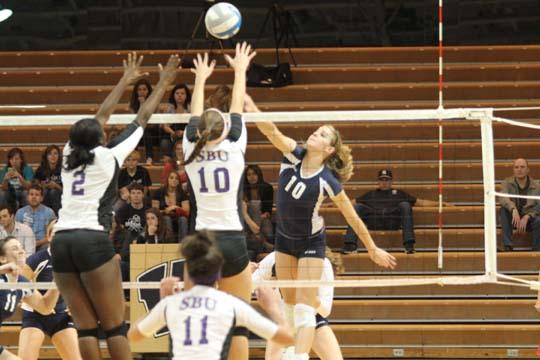 The Lady Blues kept extremely busy over the last week playing four games in eight days. Although pushed condition wise, the ladies would not be broken as they took all four games in dominating fashion.

In fact, the Washburn volleyball team only dropped one set throughout the duration of the games, which is quite impressive. However, the conditioning and mental strength of the players was a key factor in helping win each match.

“As a coach, it is really important to give them rest as they go through this active period,” said Washburn head coach Chris Herron. “However, it’s more difficult finding the fine line between giving them rest and keeping them in shape.”

Herron must have found that line and perfected it as the Lady Blues were able to keep their undefeated MIAA record alive. With the win against Fort Hays State University on Tuesday Nov. 8, they were able to put themselves one win away from clinching the MIAA title.

Their next game comes Friday at the University of Central Missouri who is battling the Lady Blues for the title hunt.

The Washburn volleyball team took to the court against Missouri Southern State University, and although the Lady Blues took the game in three sets, there were multiple times where the Lions had Washburn with their backs against the walls.

In the first set, Washburn came out flat and had several errors to give Southern the lead. After two 3-0 runs, the Lady Blues found themselves down 23-22. It was not until two errors by the Lions and a Jessica Kopp kill that gave the Blues the first set 25-23.

The second set was more like the normal Washburn volleyball as they dominated through until game point. However, it seemed like Missouri Southern would push for a chance after a 4-0 run, but Hillary Hughes sent them back with a kill to finish set two 25-19.

The third set saw the Lady Blues down 20-16 and the possibility of pushing it into another set. However, a 7-0 run by the Blues took all hopes out of the Lions and finished the match 25-22.

Kopp led the attack with 11 kills, followed by Hughes with 8 and Mollie Lacy putting down 6.

Abby Wittman led the Blues with 20 assists while Hughes dug up 12 in the back row.

Breanna Lewis had a personal goal from the beginning of the season: to reach 1000 kills. Friday against Southern Baptist, Lewis came out hot and soon met her goal of 1000 kills.

“I honestly didn’t expect it to come this quick,” said Lewis. “Now that I’ve reached it, I’m going to have to find a new goal.”

Even Coach Herron could not hide the excitement for his player as he participated in the standing ovation given for the exciting kill. There did not seem to be enough words for him to use to describe the enjoyment he had for her.

“How awesome is that!” said Coach Herron. “It’s such a great accomplishment and she’s putting it together with a great year.”

The other Lady Blues took Lewis’ example and stepped up to play well and take all three games.

Set one and two were over quickly, both meeting a score of 25-13. The team had “found its cohesion” according to Lewis and dominated, especially with the ball in play.

“When we put the ball in play we had great control of everything,” said Coach Herron. “However, we struggled serving it into play, and we just can’t do that.”

After the first two sets, it seemed as though Washburn would continue their dominance and completely shut SBU out. They took an early 10-5 lead and it looked as though Southern Baptist was done. However, they came charging back to win the next six out of seven points. The teams went back and forth until a 3-0 run when tied at 18 put the game away for the Lady Blues 25-22.

Lewis led the way with 13 kills, followed by Hillary Hughes with 8 and Jessica Fey slamming down 7.

Amanda Guess led the Blues with 20 assists and tied with Jessica Kopp to dig up 7 in the back row.

The #3 ranked Washburn Lady Blues used four sets to get rid of the Pittsburg Gorillas at Lee Arena on November 5. When the sets were taken by the Lady Blues, it was done in dominating fashion. However, the Gorillas did not go down all too easily.

The Lady Blues dominated set one with a .500 attack percentage and only one error. This gave them the easy win 25-13.

The next game; however, the Gorillas came fired up and started with an 8-2 lead. It was not until a late 3-0 run brought it with one. However, it seemed to prove too little too late, as the Gorillas were able to put it away 23-25.

On the other hand, the Lady Blues returned to action with a new ferocity and used many different runs to tear the Gorillas a part 25-14.

It seemed as though the game would be pushed into a fifth set as the Gorillas took a 12-8 lead. However, Washburn went on a huge 12-4 run to take position for the win 25-19.

Hillary Hughes had a huge night, leading the attack with 17 kills, followed by Jessica Kopp with a big 15 kills.

Jessica Fey led the way with blocks, turning away 4 and Mollie Lacy rejected 3.

Amanda Guess led the Blues with 32 assists while Gracie Petersen dug up 18 in the back row.

The Lady Blues came out flat against Fort Hays as they lost the first set. However, they took the next three sets to take down the volleyball team from Fort Hays.

The first set saw just as many mistakes from the Lady Blues as the Tigers. The Blues got up by as many as three before letting their lead slip at 11. They never could regain the lead after that, even tying the score at 23, but two Tiger points later finished the game 23-25.

The second set saw a very close back and forth action between both teams. It was not until tied at 19 when the Lady Blues put together three points in a row. This put the game out of reach for the Tigers no matter the effort as Washburn took it 25-21.

The third set, very similar to the fourth, was close until the turning point when tied at 11. With a 3-0 run, that was all it took for the Lady Blues to keep the Tigers away, as they continuously put up points and won the set 25-21.

The fourth set saw Washburn come out to dominate as some expected it to be, jumping out to a 5-0 lead. It got as bad as a lead of seven points, until Fort Hays began a slight comeback. It got as close as two, but with another 6-0 run, it was over. This finished the match 25-16

Mollie Lacy led the block total with 7. Marissa Cox rejected 5 of them while Lewis added 4.

Abby Wittman helped the team with a total of 33 assists. Kelsey Lewis dug up the back row with 15 digs.