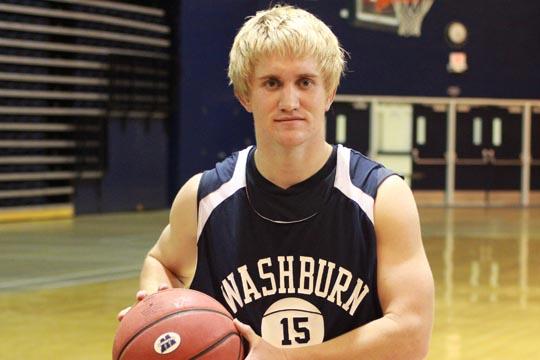 Sabetha showstopper Despite being on the short side for a basketball player, Sabetha native and junior point guard Mitch Allen gives his all for the Washburn Ichabods. Allen looks to continue to excel this season.

Hometown legends are rare amongst small Kansas communities, especially for high school athletes. But college athletes are a different story.

Mitch Allen, junior point guard for the Washburn University Ichabods, was an all-around player during his high school career, and this year, he’s raising the stakes.

“I got onto a team with a group of guys that were in the fifth grade,” said Allen. “Ever since then, I pretty much played in tournaments on and off throughout the school year.”

Allen continued playing basketball throughout Sabetha Middle School and then into Sabetha High School, where he also played football and baseball.

“You can’t take a year off,” said Allen. “You get time off in between seasons in basketball and other sports but never a full year, so I didn’t.”

Then, when the time came for Allen to choose a college to attend, he already had Washburn in mind.

“I had a couple of friends that I was playing basketball with that were already attending Washburn University: Bryce Simons and Bobby Chipman,” said Allen. “That made it comfortable for me to come to school here.”

“I had known Coach [Bob] Chipman a few summers before I first came to Washburn,” said Allen. “I was playing basketball with his son when he first started recruiting me.”

Bob Chipman, Allen’s coach of three years, had nothing but kind words about his player.

For a 5’9″ point guard, Allen proves himself amongst his teammates.

“With my size, I’ve been forced to play the only position a short guy can play at,” said Allen. “I take a lot of height jokes.”

“Mitch has had some huge shots for a player of his size,” said Bob Chipman. “He hit three out of four three-pointers against Emporia State last year; he’s not afraid to take the big shots.”

Allen has yet to score a point this season, but will get his next chance Friday at 7:30 p.m. against Tarleton State University in Stephenville, Texas.

“I think we have a pretty good team, especially for this university,” said Allen. “We’re hard workers who want nothing more than to perform our best for the university as well as ourselves.”