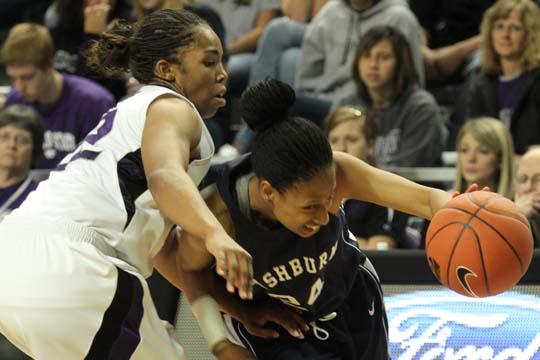 Just a bit short Washburn senior guard Ebonie williams runs outside an opposing Kansas State Wildcat. The Lady Blues held their own but ultimately lost 52-50. They play next Nov. 14 versus Tabor College.

As the seasons on the calendar change, so too must the landscape of college athletics.

With football and volleyball in their twilight, basketball currently aims to inspire the imaginations of a new legion of fans on the court.

The Lady Blues start off their new season ranked No. 1 in the MIAA and No. 11 in the Women’s Basketball Coaches Association preseason poll, despite last night’s 52-50 exhibition loss to  Kansas State University.

While Lady Blues head coach Ron McHenry said he  appreciates the faith placed in his team, he knows the end result of the season is anything but certain.

“It’s happened before,” said McHenry. “We haven’t won it, so we aren’t going to hang any banners for that. It feels good because people think you have chance to be good. You don’t want to be picked 10th or 11th in the league.”

Several formidable players have graced Washburn’s roster over the years, and McHenry is confident his team can live up the hype associated with their high ranking.

“We’ve had a lot of good players come through here that have been part of teams that were ranked high,” said McHenry. “It’s just part of the process. This program always has a bull’s eye on its back.”

The Lady Blues surprised many last season by playing well enough to compete in the NCAA South Central Regional Tournament. With many players returning from that young lineup, McHenry believes the one thing his team has on its side is experience.

“One year, someone may not have the same expectations you may have,” said McHenry. “Some years, you have high expectations, but you don’t meet them. Every year’s a new challenge. Every team’s new, every team’s different, and this team has a lot of experience.”

Eschewing superstition and fate, McHenry firmly trusts that his team holds the key as to whether they triumph or fail.

“That’s the challenge of a coach and a veteran team is to use your talent the right way, use your experience the right way and if we do that, then we can be a pretty good team.”

“We kind of eased our way into things at time,” said McHenry. “I think we can be a bit more aggressive and score quicker. Last year, we were always trying to get to a point where we were trying to win a game.”