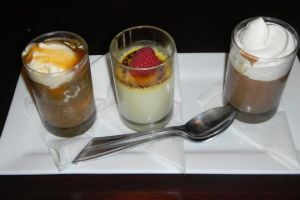 Upon entering the Blue Moose Bar and Grill, I was greeted by smiling employees and welcoming fireplaces.

The lighting was dim, but not in a romantic way, and there wasn’t really any art on the walls, just numerous large flat screen TVs. The lights were orange and resembled flames, and these were positioned on pillars around the large open dining room. The whole restaurant had a ski lodge feel to it, but the music on the overhead was pop music that reminded me of a dance club.

The menu reminded me of a lot of other restaurants found on Wanamaker Road, yet some items had a little twist to make them different. This was the first place in Topeka I had seen Baked Brie En Croute, which is Brie cheese wrapped in a French puff pastry and baked. It is then topped with fresh fruit and Blue Moose served it with lavosh crackers.

This is a good appetizer selection if you are looking for something a little different than what is normally found in Topeka.

The chicken madeira pasta seemed to be the hidden gem on the menu. Most Italian restaurants don’t usually serve this dish, and I decided I had to try it.

The sauce was creamy and tasted just right, not too much wine, but just enough that I could tell there was some in it. The menu boasted that the sauces were all homemade, and I could tell that was the truth. The mushrooms and chicken were cooked well and everything went together. It was served with a ciabatta roll which was a little hard on the outside for my taste.

I added a salad to my meal for $1.99, and I personally feel a salad should automatically come with an entrée. The salad was good, but not worth the extra money, especially because I had two bites of my salad eaten when my pasta came out. The lettuce was crisp and included a mixture of mixed baby greens and an iceberg lettuce mix, which made a surprisingly good mixture. The rest of the salad consisted of tomatoes, cucumbers and shaved Parmesan cheese. The bowl was even cold, but I was disappointed for the price.

On to the dessert, which was surprisingly cheap. They have various selections that are single serving, but I have always loved variety and went straight for the mini desserts. There are four choices and go for either $1.99 each or $4.99 for a choice of three. I chose the chocolate peanut butter parfait, seasonal cobbler (which was peach) and crème brulee. The cobbler had too much nutmeg and other spices and not enough ice cream. The crème brulee was rich and creamy and delicious, my only complaint was that the cream wasn’t burnt enough. My favorite was the chocolate and peanut butter parfait because the whipped cream was peanut butter flavored, which was a surprise to me. I enjoy being surprised, and this made me want more, and it is definitely something I would order a second time.

This is a restaurant I will gladly visit again as well as recommend my friends. The atmosphere is different than other places in town, and their menu seems to have items to offer that other places don’t. The prices are a little high, but the portions are large and everything tasted fresh. The menu has great variety with pizza, tapas, pasta, sandwiches and many other selections to please any palette. They have their menu online at thebluemoosegrill.com.