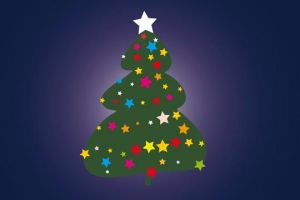 Dinner and a show plus a holiday atmosphere with a twist is what audience members can expect if planning to attend the Break Room’s second annual performance of David Sedaris’ tale, the “Santaland Diaries.”

The “Santaland Diaries” is a play based off of the personal essay by Sedaris, detailing his experiences working as an elf at a Macy’s department store in New York City.

“The performance at the Break Room is anything but traditional,” said Paul Prece, director of “Santaland Diaries,” and chair of the Washburn theater department. “It’s an opposite, almost counter tradition – although, it rounds out having a nice message and fits with the spirit of this time of year. It’s worth checking out.”

Schultz also contends that the show is not your typical holiday show.

“Most of the time, you walk in and it’s a picture of somebody else’s perfect Christmas,” said Chris Schultz, owner of the Break Room and stage manager for the performance. “The cool part about this, is that this guy tells us a story that any single person in the room could completely identify with.”

To switch up the show and give audience members a variation of last year’s performance, a new actor has been cast.  Matthew Briden stars as the main character.

“Essentially, the performance is somewhat the same, but his application on the material, temperament and attitude are all different,” said Prece.

Guests are asked to arrive at 6:30 to get the evening started.  Appetizers and other hors d’oeuvres will be served first. A cheese ball with crackers, toasted nuts and stuffed olives are just a few options.

The atmosphere of the evening is oriented to be an intimate setting that would be similar to a holiday dinner with family and friends.

“It’s like we’re bringing you to our living room,” said Schultz.

Guests have the choice of oven roasted turkey or glazed ham as their main entrée. Stuffing, mashed potatoes with gravy, green bean casserole and cranberry sauce also helpmake up the main course.

The show begins at 7:30 p.m. and runs for approximately one hour and 20 minutes.

“I certainly recommend it to students,” said Prece. “People know his name [Sedaris] because he’s been writing for a while, and he’s really a modern humorist that tells his own stories.”

For students sticking around for the holidays, it’s an option for entertainment.  Tickets for the event are $30 per person.

“We put the tickets on sale when we were doing our last show, and they’ve already sold like wildfire,” said Schultz.

Before opening, three of the nights slated for performances were already sold out.  Remaining performance dates are Dec. 22 and 23.