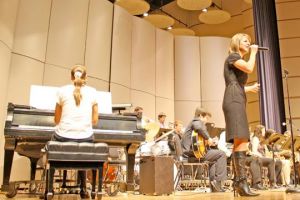 Jazz music is known for its dynamic  and inventive nature, and An Evening of Jazz, presented by the Washburn Department of Music, did not fail to deliver. The Jazz Ensembles I and II performed a vivid array of jazz music, with pieces ranging from Cannonball Adderley’s “Dat Dere,” arranged by Eric Morales to a song called “I Could Write a Book,” arranged by Harry Connick Jr.

As jazz itself is always changing, the ensembles presented the diversity of jazz music as sometimes soft, mellow and rhythmic to suddenly and seemingly random but tight-knit and clever. The big band feel of pieces, such as “Dat Dere” and “The Defibrillator,” the latter being directed by student director Lucas Whippo, got an extra big response out of the crowd and the musicians, as well. They could be seen moving energetically to the beat.

“Dat Dere,” with its lively syncopation, big band rhythm and bold ending was a great halfway point for the first part of the show, as it allowed some of the musicians to show off their individual skill. Daniel McCready, a member of the  Jazz Ensemble II, performed a passionately executed solo during “Dat Dere,” that generated a lot of applause.

“Journey to Shadowlands,” a piece with an expectant feel and dynamic twist featured a tenor saxophone solo by Evan Coleman, another ensemble II personnel,  that was smooth and controlled.

The audience especially enjoyed the piece “Everyday I Have the Blues” by Bob Ojeda and put on by the Jazz Ensemble I. Vocalist Taryn Doty joined the ensemble, and her singing commanded attention, but the ensemble quickly caught up for an ending that had the audience clapping along.

You can’t have jazz without improvisation, and both groups got their chance to show their skills during the middle of the show when select students performed from the Jazz Combos I and II. Combo II was up first, starting with a piece called “Blue Fossil.” Craig Treinen, director of jazz studies and applied saxophone at Washburn, assisted on piano as the students tried their hand at improvisation for what Treinen said was their first time live. Doty joined combo II when it was their turn, which featured an upbeat piece called “Well You Need It” with plenty of inspired improvisation and featured Treinen himself on the saxophone.

The musicians and the directors participating in An Evening of Jazz proved their passion and knowledge for the music in the show’s selection of soft, mellow jazz, big band and even blues.