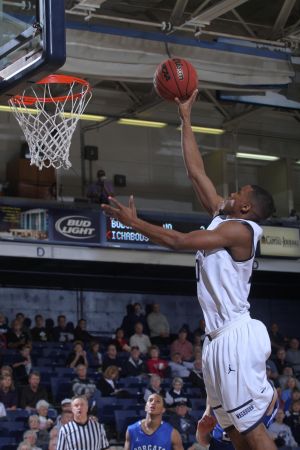 With the 2011-12 season underway, Washburn basketball has continued through the growth that comes from replacing players that had such a strong impact last year.

With the departing of forwards Logan Stutz and De’Andre Washington and guard Virgil Philistin, the Ichabods have had to turn to players that played a more peripheral role season.

The emergence of junior guard Will McNeill has been evident, as he has been the top scoring threat. With the maturation of several players who were sophomores or freshmen last year, the team has continued to progress throughout the season.

Looking to test themselves early, Washburn took on an ambitious non-conference slate of the University of Nevada-Las Vegas and the University of Oklahoma. With both teams being major Division I programs, the Ichabods looked to gain experience against a level of talent which they otherwise wouldn’t be able to play.

In the opening game against UNLV, Washburn adapted itself well, keeping the game within reach all the way until the end. With just under a minute left to go, and trailing by just five points, the Ichabods fought to get out front but were unable to close the distance, falling 58-50 to the Runnin’ Rebels. Despite the loss, the Ichabods set the trend for the team, with McNeill leading the Ichabods with 21 points.

After the two exhibition games, Washburn stayed in the Sooner State and took on its first tournament of the year in the South Central Shootout. Against the University of Arkansas at Monticello, the Ichabods fought hard back and forth as the lead continued to balloon for UAM to as many as eight, while Washburn took modest leads of as many as three points. The Ichabods, however, were unable to overcome the lead and fell 80-72. McNeill once again led Washburn with 24 points, while sophomore forward Alex North contributed a double-double with 12 points and a career-high 11 rebounds.

The second opponent of the tournament, the University of Arkansas-Fort Smith, proved to be the lesser of the two Arkansas opponents, as Washburn was able to take their first regular season win against UAFS, 87-66. Behind the game-high 29 point performance of McNeill and 11 rebounds to get his second career double-double, Washburn was able to hold off a late charge to take the win.

Next up was a tournament, the Tarleton State Classic in Texas. After managing a split in Oklahoma, the Ichabods experienced a bit of déjà vu, getting a split against Cameron University, falling 61-54, while downing host team Tarleton State University, 61-57. Junior guard Martin Mitchell led Washburn in scoring with 18 points, 16 of which came in the second half.

Upon returning home, Washburn took on Peru State College. With another stellar performance by McNeill, including 21 points, Washburn took down the Bobcats, 97-72, with a collectively hot shooting night including 56 percent from the floor and 61 percent from beyond the three point line. With the win, Washburn managed its first winning streak of the year.

“It felt good to get the win,” said McNeill. “We have kind of an up and down season so far so it was nice to get some momentum.”

Three days later it was much of the same as the Ichabods took on Newman University. Washburn took the win 88-63 en route to a historic win for its longtime head coach Bob Chipman. With the victory, Chipman earned career win 700 in his 33rd season at the helm of the Ichabod program. After the game, Chipman gave praise to those that have contributed to his long lived success.

“I just can’t say enough about the players that gave so much over the years,” said Chipman. “I’ve been so fortunate to have such great people on my staff and so many fine young men come play for me.”

Washburn then went on the road to take on a non conference match with former MIAA foe and newly minted Division I team University of Nebraska-Omaha. In what turned out to be a hard fought affair, Washburn was able to hold off a hard push as the Mavericks were able to come back from a large deficit in the game, cutting the lead to seven. The Ichabods were able to respond and in doing so downed their first Division I opponent since 1984 when Washburn took down Oklahoma State University in Stillwater, Okla.

Continuing the road swing, the Ichabods next took their record into Maryville, Mo. against Northwest Missouri State University. Washburn would build a first half lead but would be unable to keep hold of it as the Bearcats came on strong in the second half before finally prevailing 65-59.

Patrick Tomei’s senior exhibit “Zenskunigenron” is on display from December 5 – 23 inside of the Andrew J. Georgia Neese Gray Theater Lobby Gallery. Zenskunigenron (pronounced “ze n a ku ni ge n ro n”) is heavily influenced on Daoism, a Chinese philosophy, which portrays the balance between good and evil. Some of Tomei’s works includes poetry, which helps to describe the meaning behind each piece.

“On the surface of Zenskunigenron it means exactly that, but it reaches far beyond good and evil. The poems of the Dao de ching have many interpretations and reflect the experiences of the reader, much like art is interpreted by the viewer,” said Tomei.

“I do not just create art, but art in turn creates me. From when my brush touches the canvas the canvas is like a mirror painting on me as I paint on it. This duality is a part of my life and work as an artist,” said Tomei.

The art that Tomei creates on canvas may only focus on one side of the actual duality. His work as a whole focuses on both sides. He focuses on the subject of angels and demons and the eternal conflict between the two forces, but also focuses on other ways to interpret this philosophy into his art. The white side of the paper represents one side and the ink represents the other, two forces fighting over dominance.

“I am greatly influenced by oriental culture; from the religious philosophy to the artwork and style. However the history and mythos that makes up these ancient lands is vast spanning thousands of years. I have only just barely explored this region and with further explanation. I am sure I will find and discover more exciting and interesting concepts and ideas,” said Tomei.

“As long as my mind remains open I will continue to learn and experience new things; however the day my mind closes is the day I give up on my entire future and refuse to go any further down the path of creation and discovery,” said Tomei.

The Andrew J. Georgia Neese Gray Theater Lobby Gallery’s hours are open from 8 a.m. to 5 p.m. Monday through Friday. The gallery will be closed from December 24 to January 2 when Washburn University is closed for Winter Break.