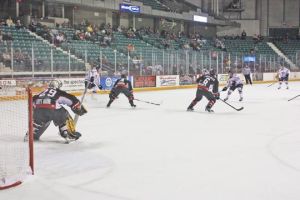 The Topeka RoadRunners started strong. It was all they needed to take control of Friday night’s contest.

Forward Ben Bahe scored two goals to get over his recent slump, goaltender Peter Traber turned aside 24 of 25 shots and the Topeka RoadRunners as a team notched four first period goals as they defeated the Wichita Falls Wildcats 5-1 at Landon Arena.

Topeka (17-10-2) knocked in their first shot on a backhander from Bahe just 36 seconds into the contest. Wichita Falls (9-16-1) found themselves playing catch up the rest of the night as Bahe scored again at 7:40 on a one-timer after a pass from forward Linus Johannson to make it 2-0.

“Since we put Bahe back with [forward] Brian [Christie] and Linus, they’ve been doing some really good things,” said Langer.

Bahe also said that after his recent scoring drought, putting those two early shots in the back of the net was relieving.

“I had a little weight lifted off my shoulders,” said Bahe. “Last weekend, I got fed a couple times and I should’ve buried the shots. It was nice to put a couple in tonight.”

Topeka didn’t stop the pressure from there. At 9:42, a rebound was poked into the net by forward Sean Gaffney. Forward James Ring was then able to notch his third goal of the season at 11:29. Wichita Falls scored late in the period, at 18:06, on a goal by forward Ben Kucera to make the score 4-1 at first intermission.

Langer said this week’s practice was indicative of the team’s play on Friday night.

“We had a very good week of preparation and it certainly equated to the start we had tonight,” said Langer. “It’s tough to play a team when they come out of the gates that hard and quick like we did.”

Forward Dan Dupell was able to send a puck trickling past sprawling goaltender Matt Leon at 2:26 of the second period to score the game’s final goal.

Halfway through the second period, Leon was pulled and replaced by goaltender Ryan Kellenberger. Kellenberger stopped the 17 shots he faced. Topeka outshot Wichita Falls 30-25 for the contest.

The two teams face off again Saturday night at 7:05 p.m. as Topeka looks to complete the series sweep.