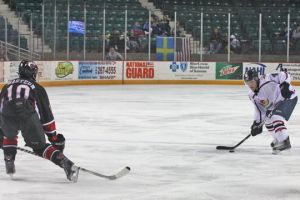 After coasting to a victory one night before, the Topeka RoadRunners needed a few heroics Saturday. Fortunately, they received exactly that.

That statement has a nice Ring doesn’t it?

Trailing late in the third period, at 14:40, Topeka defenseman Kevin Patterson fired a rebound past sprawling Wichita Falls Wildcats goaltender Matt Leon to tie the contest at two. Following a scoreless overtime, Topeka (18-10-2) then received clutch goaltending from Peter Traber in the shootout, and Topeka forward James Ring was able to deliver a goal in the 11th round as the RoadRunners knocked off the Wildcats 3-2 at Landon Arena.

Ring’s shot was a quick wrist shot that went through the legs of Leon, sending his teammates over the bench to celebrate. Scott Langer, Topeka head coach, was happy to see Ring capitalize on his chance after neither team scored a goal in the previous five rounds.

“Having a young guy like James Ring come up big allowed him to just take a huge step,” said Langer.

Langer was equally impressed with Traber’s performance. Throughout the season, the RoadRunners have struggled with goaltending until recently.

“You know, he just keeps growing,” said Langer. “When he came in, from then until now, he’s just kept growing. It just shows you his competitiveness. It’s been a while since you’ve seen that from a RoadRunners goalie in a shootout.”

In the first period, Topeka looked to be the aggressor, but it was Wichita Falls (9-16-2) scoring first at 10:59 when forward Renato Engler fired a rebound past Traber. Topeka did lead in shots on goal after the first period, 9-5.

Wichita Falls’ lead held up until 6:59 of the second period when Topeka forward Kyle Sharkey redirected a Patterson slap shot past Leon to tie the game. But the tie only held up for roughly four minutes. At 10:24, defenseman Adam Barlow gave the Wildcats a 2-1 lead on another deflected shot.

After coming out for the first period with energy, Langer said his team let off the gas a little bit for the rest of the game, despite the victory.

“We certainly didn’t play at the same pace we did last night,” said Langer. “We had some huge opportunities we left out on the doorstep and then they came back and scored that goal to go up 2-1.

“I just didn’t see us having that enthusiasm we did last night to go to the net and win some battles. But we stuck to the game plan after getting away from it in the second period and it worked out.”

Late in the third period, the aforementioned Patterson goal tied the contest. He said he was just the “fortunate recipient” of a great setup on the powerplay.

“We were working on the powerplay and [Brian] Christie took a shot and it bounced right in front of the net,” said Patterson. “[Kyle] Sharkey just kind of tied the guy up who was defending and I was fortunate to be at the right place at the right time. So it was just kind of a bounce that went our way.”

Topeka now plays an exhibition contest in Dodge City, Kan. tonight against the Wenatchee Wild. The game is designed to determine the interest in hockey in Dodge City, where a new multi-purpose arena has just been built.

Following the exhibition contest, Topeka returns home to face Wenatchee Friday and Saturday. Faceoff for both games is 7:05 p.m. Friday is deemed a “white out” with a special jersey auction following the contest, and Saturday will include a “teddy bear toss” after Topeka scores their first goal.