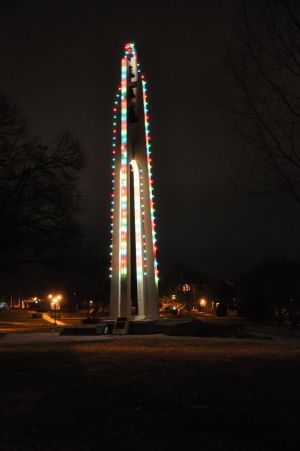 Free music, art and videos, all in the holiday spirit, are offered within the “A Light Goes On” project. While the art is new, similar projects have been around for years.

“It morphs and really changes every year, and I add new aspects to it,” said Sam Billen, creator of the project and adjunct instructor of English at Washburn University. “So this year, it’s really different in the sense that it’s a compilation.”

Three years prior, Billen tried a compilation project with other artists but not of the same scale.

That compilation was for nine songs, with four to five different artists. Enjoying the idea of the compilation, Billen thought to try again for this project but with more artists and more time.

This year, the project has aspects that hadn’t been done in years previous. While using an interactive website, more artists are able to show their talents. Art work in the forms of collages, videos and other animated features can now be a large part of the project online.

Billen has been behind a Christmas project for four to five years now. His first project of the sort was very personal. Thinking of a Christmas present for his family, he recorded several hymns in the studio. He credits his first project mostly to experimentation. That first year, Billen burned CDs on his own computer and handed them out for free. He explains how his first experience was rewarding and how he received great responses from everyone he handed out the album to.

“I definitely learn things every year,” said Billen, in response to the changes the projects take on. “I think I want to do something completely different just like I usually do.”

While the project may change in a sense every year, some things will never change, according to Billen.

Last year’s project was entitled “Words of Encouragement.” Billen explains that the idea of the project every year is to encourage people, to inspire people and to remember what Christmas is about for Christians and non-Christians alike.

“It’s not to be focused on the consumerism or commercial side,” said Billen. “It’s more about the humanity and giving of yourself and sharing what you have.

“Ultimately, it’s a way to say Merry Christmas for free and, the ‘free’ will never change.”