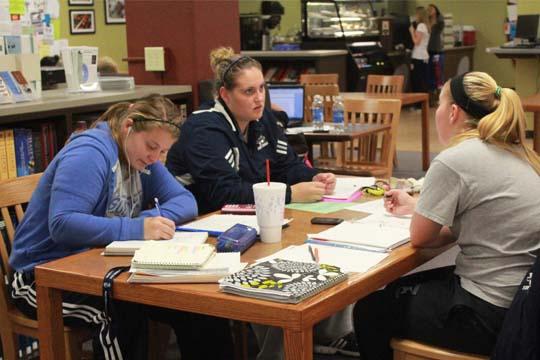 Many students say the exact same thing when it comes to finals week: sleep is an unnecessary thing, food is required only when it’s junk food and studying is the only thing worth making time for.

However, from another perspective, Washburn University’s director of counseling services, Marilynn Koelliker, completely disagrees. Instead, Koelliker believes that the healthy answer is always the best option.

She believes studying for finals week while in college should not be a complicated thing. According to Koelliker, a college student should have a habit of studying throughout the semester.

“It should be a routine,” said Koelliker. “Routines will always be easier to remember and keep up on.”

The director said that the worst habit during finals week is cramming.

“It is and always will be non effective,” said Koelliker.

Instead, Koelliker advises to take a healthier direction when preparing to take college finals.

“Exercise will always help,” said Koelliker. “It helps oxygen return to the brain.”

Brain food is also highly advised instead of poor nutritional choices (a.k.a. junk food) such as chips, fats, ice cream and chocolate.

“Protein, the good kinds of fat and omega threes are incredibly important when keeping the brain at it’s best functioning ability,” said Koelliker.

Sleep is also a very important aspect of making it through finals week.

The advised and healthy amount of sleep per night is eight hours, although many students have schedules that prevent them from doing so.

Something the director recently learned was another form of healthy stress relievers while taking a break during studying. While studying, students take breaks every so often to relax and concentrate on not overloading their brain. Usually, these breaks consist of walking, but Koelliker advises stretching instead.

“At a conference I recently attended, we spoke of stretching across the body’s midsection,” said Koelliker.

Stretching your arm across your chest and your leg across your hips will awaken both hemispheres of the brain. It’s actually been highly recommended in helping deal with large amounts of stress while studying for finals.

“Finals are passable,” said Koelliker, “a healthy approach will help.”