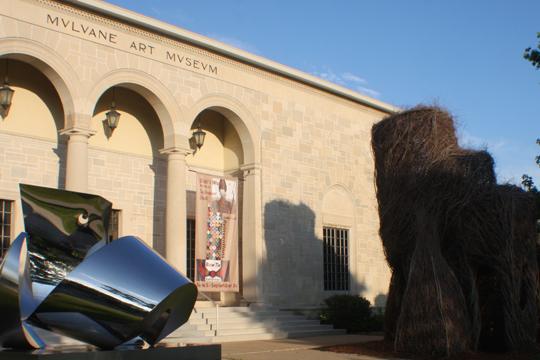 Mulvane Merriment, an annual fundraiser for the museum, was forced to relocate to Fairlawn Plaza Mall because of problems in the building’s climate control systems.

“It was a little surprise this year when we found out that about the time we wanted to have our fundraiser, they were going to be closing the museum to do some work,” said Jeanne Cohorst,

president of the Mulvane Women’s Board.

“The relocation ended up working to the benefit of the fundraiser,” said Cohorst. “The new location in the mall was able to house more artists and attract community members who may have been shopping in the mall in addition to the regular arts supporters.”

The artists at the fundraiser had stalls from which they were able to sell their work. Many different mediums were available for purchase, including sculpture, woodwork, jewelry, photography, glass, painting, pottery and others. A bake sale and silent auction were also featured at the event.

The timing of the art fundraiser in early December allowed for art shoppers to purchase handmade artwork for the holiday gift giving season.

“The weather could have been a little bit better, brought some more people out,” said Cohorst.

Previous fundraisers have generated around $3,000 each year for the arts. Sales this year were comparable or better than last year according to volunteers at the event.

“I think the majority of the artists felt it was a good day for them,” said Karen Robinson, who volunteered at the event. “There were some that were disappointed, but that’s the gamble.”

Most of the silent auction pieces were sold during the event.

“The baked goods, all of which were donated, were about as popular as last year,” said Robinson.

Mulvane Merriment is one of the events put on by the Mulvane Women’s Board throughout the year that helps to fill funding gaps for the museum. Proceeds from the event also go toward granting art scholarships for Washburn students.

“It helps them pay for going to school and becoming artists,” said Mulvane Art Museum Director Cindi Morrison. “Some of the programs that we have would not be happening without them. Minimal funds go to overhead for the event. Nearly all of the proceeds go directly toward supporting the Mulvane Art Museum and the various art education projects they fund.”