McHenry kids around with poetry 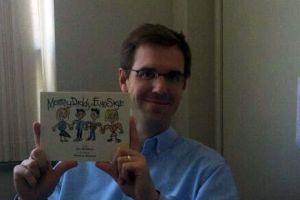 After writing “Potscrubber Lullabies,” a decidedly more adult tome, McHenry was too busy raising two children to write more ambitious poems. Instead, he started a blog of observation based on his children and their antics that he deemed amusing, which eventually led to his new book.

Eventually, McHenry took the poems to Philip Hoy of Waywiser Press, publisher of “Potscrubber Lullabies.” Even though, the publisher typically stays away from children-oriented work, they accepted “Mommy Daddy Evan Sage.”

“One day, Phil emailed me back, and I was kind of amazed once I found out what it was,” said McHenry.

Along with McHenry’s poems, the book also features illustrations from English artist Nicholas Garland. McHenry and Garland collaborated back and forth on the project, giving suggestions to each other about including more in the art and cutting lines from the poems. According to McHenry, Garland made one of the greatest contributions by suggesting including more of a mother in the poems’ dynamic.

“Nicholas Garland has grandkids who are almost exactly the age of my kids and the two kids in the drawings look a lot like his grandkids,” said McHenry. “I think he was having fun imagining his own grandkids in these poems and creating illustrations based on them.”

Having lived in Washington, Massachusetts, New Hampshire, and Wisconsin before coming back to Topeka, McHenry was exposed to poetry from an early age and appreciated what he considers the best words in the best order and rhyming.

“I grew up in a house where poetry was valued,” said McHenry. “My mother would recite poetry just as her mother had recited poetry to her.”

Though McHenry later was impacted by poets such as Philip Larkin, Robert Frost and Gwendolyn Brooks, he originally got his poetry fix from what some may consider an unlikely source.

“The very first generation of bleeding-edged hip-hop was coming out when I was in grade school,” said McHenry. “I had never heard anything like it before, but I thought the idea of having a rhyme available whenever you needed one was kind of a virtuosic thing.”

McHenry’s interest in poetry grew after winning a contest in his youth and the praise of Carolyn Kizer, a guest professor at McHenry’s graduate school.

“It was just one of those moments of someone making a little gesture of support for your work,” said McHenry.