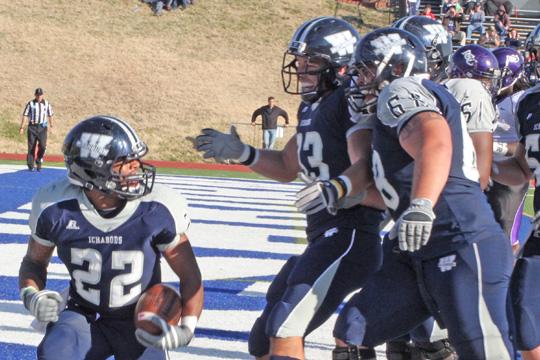 Season of Highs Washburn running back Sean McPherson looks back over his shoulder as the offensive line comes to greet him in the endzone. McPherson was one part of a two headed running attack that helped lift the Ichabods to a 10-3 season.

History. It’s a word that carries a lot of connotations.

From a star quarterback who soared to new heights to a team that finally broke through while elevating an already accomplished program to a new level, the 2011 season for Washburn Football was nothing short of impressive.

Prior to the season, Washburn had obstacles and tragedies to overcome. June 11, 2011, is a date that will live in the memories of those associated with Ichabod football. Redshirt freshman Jermon Watson, a promising young player for Washburn’s defense, was the single fatality in a car accident. The tragedy in some respects helped to bring the team closer together.

Throughout the season, the team kept Watson in its thoughts as a player during each game took a turn wearing what would have been Watson’s jersey number, 20, to honor his memory.

From tragedy, the team then was side-swiped by controversy when star junior running back Vershon Moore was arrested and later pleaded guilty to bank robbery. All-American defensive back Pierre Desir later left the team after missing training camp for personal reasons.

Through all of these trials, the team never lost focus as they continued to prepare for the upcoming season. To show skeptics, despite all that had taken place over the offseason, Washburn was ready for a strong season, the Ichabods went on the road to open the season.

In the opener, Washburn took down a University of  Sioux Falls (S.D.) team that became just one of many victims of senior quarterback Dane Simoneau. With a performance that featured 5 touchdown passes and 452 yards passing, Simoneau led Washburn to their first win of the season 33-17.

Washburn’s second opponent of the season, Lincoln University (Mo.), featured a barrage of offensive fireworks that the team wouldn’t be able to match all year. For those in attendance, if they blinked they might have missed the first three Washburn touchdowns. In what turned out to be Simoneau’s shortest appearance in a game this season, throwing just eight passes for 80 yards before pulling the star quarterback to give him rest, the Ichabods turned to senior running back Justin Cooper who rushed for 159 yards and 3 touchdowns on just 12 carries. Not to be shown up, redshirt freshman running back Sean McPherson chipped in with another 110 yards and 3 touchdowns while only toting the ball six times. When the dust settled, Washburn sent Lincoln packing with a 66-26 victory over the visitors.

Heading east on the road again, Washburn encountered its first legitimate opponent of the year in Missouri Southern State University. The Lions roared long and hard in the first half as both teams struggled to get any points on the board. Going into the locker room at the half Washburn trailed for the first time in the season, 7-3.

Simoneau however wouldn’t be denied as he teamed up with sophomore wide receiver DeJuan Beard to give Washburn a hard fought win on the road. Simoneau would finish the game throwing 23-45 passing for 274 yards and 4 touchdowns. Beard proved to be the money target, hauling down nine passes for 141 yards while finding the endzone twice. With just shy of 100 yards on the ground from Cooper, the Ichabods managed a 30-14 win.

Coming back home, Washburn took the first step in a string of firsts for the Ichabods. For the first time, Washburn appeared on national television via the CBS Sports Network. The foe in the game, Missouri Western State University was looking to deflate Washburn’s momentum. The game featured some of the most physical play of the season for the Ichabods as both teams both teams combined for 11 penalties throughout the contest. Simoneau once again led the Ichabod attack, passing for 360 yards on 23-39 passing including 4 touchdowns. Not wanting to give the defense a chance to lock onto one single receiver, Simoneau ended up distributing passes to nine different players en route to a 41-20 win.

“It was a playoff type of atmosphere,” said head coach Craig Schurig. “We had some mistakes but we were able to overcome them and get a quality win for us.”

Washburn’s next game took the team down to Emporia, Kan. for the annual tradition known as the “Turnpike Tussle.” Facing off against an Emporia State University team that had struggled up to that point, the Ichabods knew that records were thrown out in a hard fought affair that featured four lead changes throughout the contest. Trailing by as much as 11 points in the first half, it would take a strong effort in the second half for Washburn to take back the lead and put down the Hornets for good, 31-17.

Next on the slate came the Bulldogs of Truman State University. While Washburn dispatched TSU with a 42-14 win, the real story of the game was that of Schurig moving into first on the all time coaching wins list at Washburn with 68 career wins en route to 72 by season’s end.

“You know getting that mark is an honor,” said Schurig. “It says a lot about everything we have done and the way we go about things that we have been able to put together this kind of success in the 10 years we’ve been here.”

Washburn however didn’t have long to celebrate as the Ichabods faced off against Northwest Missouri State University. The Bearcats, one of the preeminent powers of the MIAA, would show Washburn that while the Ichabods had come far, there was still much to learn as NWMSU unloaded a torrent of scoring behind the performance of their start quarterback Black Christopher who threw for more than 400 yards and three touchdowns while tallying up another 83 yards rushing and one touchdown on the ground. Unable to contend with the Bearcats, Washburn fell in their first loss of the year, 52-28.

Returning home, the Ichabods looked to get back on track during homecoming week against a Fort Hays State University team that was struggling. From the start of the game Washburn played with an intensity that came through on the scoreboard. After scoring 10 quick points in the game, Fort Hays would hang around bringing the score as close as two points before the Ichabods behind the 114 yard rushing performance of Cooper and 313 yard passing display by Simoneau were able to pull away and take the Tigers down 45-20 to finish the game. During the game Simoneau became just the fourth player in conference history to throw for more than 10,000 career yards.

Washburn’s last road game of the year would come against the Pittsburg State University Gorillas. With the Cooper-Simoneau duo rolling for a combined 483 yards of total offense, Washburn was able to take down PSU 43-25, temporarily taking the lead in the MIAA conference standings.

The final week of the season would see a disappointing result as, Washburn celebrating senior day, fell behind 14-0 early against the University of Central Missouri. The Ichabods were never able to catch the Mules as UCM ended Washburn’s regular season a sour note 39-21.

With a 9-2 finish to the regular season, Washburn qualified for the NCAA postseason for just the third time under Schurig. Drawing a matchup in the first round at home against Abilene Christian University, the Ichabods looked to do what had never been accomplished in the school’s history, gaining a playoff win. In what turned out to be a wild, high scoring battle, both teams combined for more than 1,200 yards of offense. With a bend-don’t-break mentality, the Ichabod defense came up with just enough plays including 3 interceptions to give Washburn its first playoff win and earn a school best 10th win of the year.

Washburn’s season however would finally reach its twilight against a familiar face. The Ichabods took on Pittsburg State, a team they had defeated earlier in the season during conference play. With inhospitable weather conditions and a tough-as-nails Gorilla defense, Washburn was unable to advance further in the postseason, finishing the year 10-3.

“It was a season full of a lot of accomplishments,” said Schurig. “I’m very proud of what our players and coaches were able to do. Its a season we’ll look forward to building on.”