Topekans reflect on Brown vs. Board 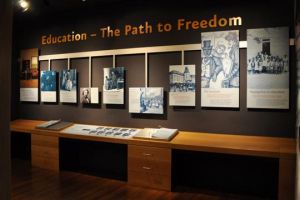 As Black History Month approaches, there are a number of things to keep in mind and reflect on about the true history and significance of African American culture.

More often than not, the busier one’s is, the less one can find time to go to local museums and parks, though Kansas played a major part in African American history.

Not only was Kansas known for the battles of Bleeding Kansas, but it is the site of the majority of post-war freedoms.

In fact, after the war, approximately 8,000 ex-slaves set their destination to Kansas. The state has countless historic sites about African American history and the Civil War, including a whole town designated as a historic site. In the Kansas Museum of History, a visitor can find flags from the Civil War, a chair from the Underground Railroad and more.

The significance of African American history has not been lost to a number of students.

“[Black History Month] is about African American evolution, freedom and power; [ex-slaves] made so many changes,” said Jonathan Panqueva, senior kinesiology major. “They had to gain strength to gain economic power, education and culture.”

Topeka was also home to the court case of Brown vs. Board of Education and has an exhibit displayed in the former Monroe Elementary School downtown. In this exhibit, a visitor will encounter a park ranger who will assist them by explaining the history of Brown vs. Board. The building itself offers video, and other media displays of the case’s significance, as well as numerous rooms of galleries depicting the people, places and events significant to it.

“Brown vs. Board is very significant,” said Shakeya Steele, sophomore business major. “If it didn’t happen, I wouldn’t be able to attend class here today.”

There are many opportunities to take part in viewing an exhibit on African American history this month as we celebrate the freeing of slaves in the Civil War and all other aspects of Black History Month.

The Kansas Museum of History is open from 9 a.m. to 5 p.m. Tuesday through Saturday and from 1 to 5 p.m. on Sundays.