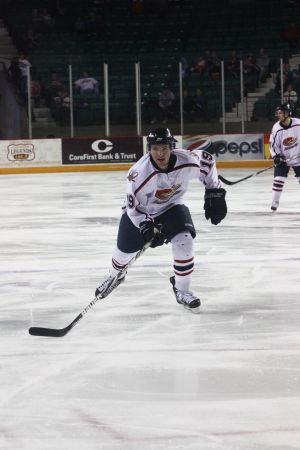 Aided by goals from defenseman Mick Bruce and forwards Sean Gaffney and Dan Dupell, Topeka (26-12-2) held off Texas (25-11-6) late as they defeated the Tornado 3-2 at Landon Arena.

Losing 2-1 Friday night in a game that lacked a sense of intensity, Topeka head coach Scott Langer said the return of Bruce and Dupell on Saturday was crucial. Both players were suspended for Friday’s contest due to events that took place in Topeka’s series the weekend prior.

“It’s nice when you put two guys in who both score,” said Langer. “Dan [Dupell] was right back on the horse. You know, with his work ethic, he probably could’ve even had a few more goals. Hopefully he continues that work ethic.”

The scoring started early for Topeka as Bruce ripped a shot past Texas goaltender Joakim Jutras just 48 seconds into the first period. It was Bruce’s first goal of the season in 39 games.

“It was a great feeling [to get a goal early],” said Bruce. “It was really frustrating sitting out and watching the team so coming back and responding like that really felt great.”

Later in the first period, Topeka appeared to score their second goal, but the play was ruled dead as the referee lost track of the puck before it trickled across the goal line. The ruling was much to the chagrin of the season high 3,487 in attendance.

In the second period, Topeka again came close to a goal as they had a 3-on-1 break, but despite the red light turning on to signal a goal was scored, the referee did not stop play. Texas was able to tie the game at 13:35 of the period when forward CJ Reuschlein capitalized on a turnover and buried it behind Topeka goaltender Peter Traber. Gaffney then scored on a 2-on-1 break at 18:18 to give Topeka a 2-1 lead at second intermission.

Texas attempted to climb back into the game early in the third period, as they had a powerplay. But Dupell used his speed to his advantage, grabbing a loose puck and firing it past Jutras to give Topeka a 3-1 lead.

“Being shorthanded, we definitely try to still produce as much offense as possible,” said Dupell. “We try to stay defensive, but if there’s a chance to be offensive and produce, we’re going to try and score goals.”

Forward Jordan Lovick notched a shorthanded goal at 18:13 to cut the Topeka lead to 3-2, but Traber and the Topeka defense turned aside any notion of a tie game with tough play late in the game.

“I thought our energy level was quite different from last night,” said Langer. “We were a lot more physical and won a lot more races to the puck tonight. We did a good job getting those timely goals.”

Topeka returns to the ice Friday and Saturday night as they face the New Mexico Mustangs at 7:05 p.m. at Landon Arena. This will be the only time the two teams meet this regular season after they played each other seven times last season.