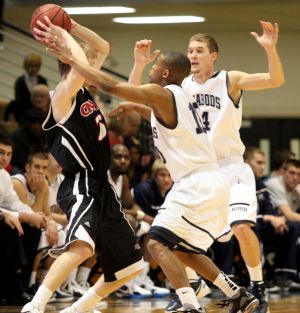 With a standout defensive effort, the Ichabods were able to take down the same Division I team for the second time this season.

Having traveled to Omaha Nov. 29, where Washburn was able to escape with a 73-63 road win, the Ichabods were prepared for a team bent on revenge.

“We beat them earlier in the year so we expected them to come up here pumped up to get some revenge,” said Washburn head coach Bob Chipman.

Washburn had other things on its mind however as the Ichabods threw up a wall of defensive pressure, jumping out to a 11-0 lead to open the contest. With a total of 13 steals, 2 blocks and 25 defensive rebounds, Washburn unraveled the Maverick game plan. Junior guard Will McNeill led the Ichabods, picking the UNO pockets 5 times including one that led to a slam dunk, electrifying the Lee Arena crowd.

While Washburn kept the Mavericks off the scoreboard, McNeill and company went to work on the offensive end. Leading the team in scoring, McNeill put in a game high 18 points as Washburn jumped out to a lead that ballooned to as much as 19 throughout the game. junior guard Martin Mitchell and junior forward Zack Riggins also broke double figure scoring with 10 and 11 points respectively.

“Will was awesome once again for us,” said Chipman. “He really played well and helped get us going today.”

In addition to the scoring the team also crashed the boards hard, pulling down 38 total rebounds, 13 of them coming on offense. McNeill paced the Ichabods with 6 rebounds while 5 other players had 4 or more as well.

Today’s victory moves the team to a 13-5 record on the year as Washburn braces itself for the second half of the MIAA conference schedule.

“Its a competitive league this year,” said Chipman. “We’ll have to get ourselves better each day so we can finish strong.”