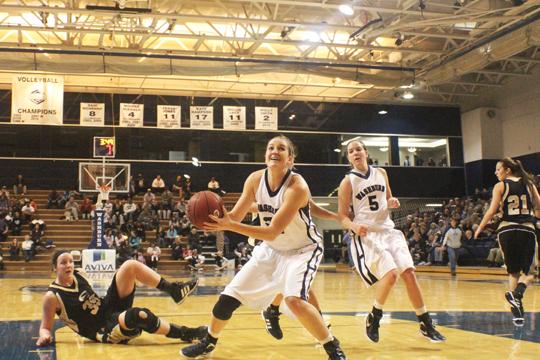 Junior forward Dana Elliot looks to score against Emporia State during a regular season game. Elliot led the Lady Blues with 18 points against West Texas A&M University in the first round of the NCAA Playoffs. Washburn won 68-36 and will wait to see who they play next.

Washburn Lady Blues went into last Wednesday’s game 19-0 all-time against the Lincoln girl’s basketball team. Although they started off sour, they were able to turn sweet and put away the Blue Tigers 73-64.

Although they realized Lincoln was a much tougher team than in years past, there was a slight letdown when preparing for this game compared to their previous matchup with Emporia State.

“I try to make sure they understand every game goes on the record board as the same value,” said Coach McHenry. “But of course, they are going to prepare differently in their own minds.”

With very few people at the game, it was hard to get motivation going for the Lady Blues. They began quite sluggish and just did not look like themselves throughout the half.

“We even sat there looking through film and could not recognize our girls and how poorly we started,” said McHenry.

However, the second half proved to be quite an improvement, as WU hit percent from the field. McHenry’s halftime speech was primarily to technique and to finish plays, and the ladies pulled through.

Things continued going south for the Lady Blues at the beginning of the second half, but a long run of 13-0 from Washburn significantly took the lead. One the girls maintained the rest of the night.

An impressive figure from the 13-0 run included nine of those points coming from bench players. McHenry stressed has throughout the year that the Blues’ depth is was one of the strongest across the nation.

“We always have the bench production, sometimes offensively and others defensively,” said McHenry. “They just put more up on the offensive side and got noticed for it on that particular night.”

Six players from the Lady Blues were able to score eight or more points, led by reigning MIAA Athlete of the Week Ebonie Williams with 21.