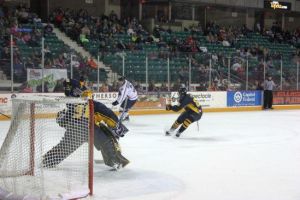 Following a trudging by the Wenatchee Wild in their final game before holiday break, the Topeka RoadRunners looked like a team out to redeem themselves on Friday night.

In a tight game where defensive efforts and goaltending were the main story, Topeka (20-11-2) was able to edge the Springfield Jr. Blues 1-0 at Landon Arena.

Forward Linus Johannson scored the game’s only goal at 18:43 of the first period when he redirected a shot from defenseman Michal Pastor past Springfield (12-19-1) goaltender Connor Girard.

But the larger story of the contest was the play of Topeka’s defense, which blocked numerous shots in the contest and the play of goaltender Peter Traber, who stopped all 18 shots on goal. Traber gave up three goals on just 11 shots in Topeka’s final game before the break, a 7-1 loss to Wenatchee on Dec. 17.

“It was a passionate effort,” said Scott Langer, Topeka head coach. “It definitely is more noticeable in their game when they’re playing more passionate. There was a lot of shot-blocking out there and a lot of guys buying into the team and not selfish efforts, and that’s important.”

It was a credit to Topeka’s defense on the low shots on goal. The RoadRunners have struggled with injuries much of the season, but it was not apparent defensively in Friday’s contest.

“That group there has had a tough time, losing Joe Van Antwerp and Cory Ramsey, and now Kevin Patterson potentially for the year,” said Langer. “Those guys have to step up. Blake Box, who comes in every so often, did a great job tonight. It’s not easy in this league to step in and play D at this level.”

Springfield did make a push down the stretch to tie the contest, pulling their goalie late in the contest and also having a late powerplay. But Topeka’s team effort helped seal the victory.

“When you win a 1-0 game, it’s very satisfying because it’s a lot of hard work,” said Langer. “(The Jr. Blues) came at us pretty hard down the stretch, but our goaltending was very good and I thought our defensive posture was very good as a team.”

Topeka will face Springfield again Saturday night at 7:05 p.m. in the series finale.