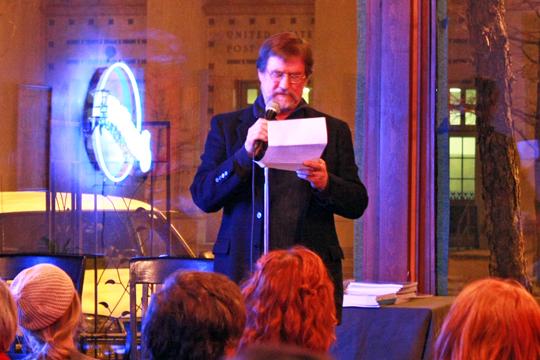 Professor Poetry Tom Averill, writer in residence, reads both a poem from the published anthology as well as another of his personal works.

Friday night at Bosco’s Downtown, poets shared their work that was published in the Blue Island Review.

“Blue Island Review” is an anthology created by Katie Longofono, who noticed the lack of such publications in the northeast Kansas area and wanted to change that.

After taking a large poetry class at Kansas University, Longofono decided to create the Blue Island Review, not only to create a setting for writers to share and have their work critiqued in a small group setting, but also to close the gap between academia and local writers.

“‘Blue Island’ Review provided a unique home for academic and less conventional poets alike, bound by a common residence,” said Longofono. “I was introduced to the work of many writers and was able, in turn, to give their work exposure.”

The anthology includes mostly short, image-driven poems with strong and vivid descriptions. It features seasoned poets, some with published works, as well as younger writers whose first publication is the anthology itself. Washburn professor, Tom Averill, as well as SevenEightFive poetry editor, Dennis Etzel, have poems included in the publication.

“Blue Island Review” can be purchased online at lulu.com for $15 or at The Raven Bookstore in Lawrence.