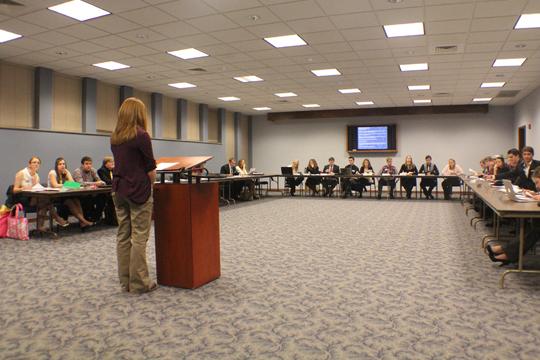 With the beginning of the new semester comes a return to action for many organizations. As the elected voice of students, Washburn Student Government Association is set to roll out a busy agenda in the first few weeks.

Among the various topics discussed during their first meeting of the semester, WSGA heard funding requests from several different organizations.

Washburn Art Student Association takes a trip each year to Kansas City in order to view the exhibits at the Nelson Atkins museum. This year, however, WASA is heading north to visit the art scene in Omaha, Neb. After a brief introduction by Mark Brenneman, WASA treasurer, the assembled members of WSGA voted to give them funding for their trip to help cover the costs of staying overnight in Omaha.

“We’ve always done this trip, and we just wanted to break out and do something different this year,” said Brenneman. “It will be a worthwhile opportunity for our members to see some things they might not otherwise.”

Also, on the agenda was a request for funding from Washburn’s flute ensemble. The group is preparing to take on a trip to perform in front of the National Association for Music Education.

After hearing funding requests, WSGA committees then were asked for reports as well. Most of the different groups of senators had little to report at the time, because events haven’t started up yet. The executive committee did take the opportunity to remind the assembled senators of the need for them to get involved in helping both the staff and promoting upcoming events.

The two in particular that were mentioned were the kickoff to the spring edition of the WSGA lecture series featuring Gracia Burnham and the annual food drive event called “Can Emporia.” Specifically, Amber Kissell, WSGA special events director, paid special attention to those that don’t usually sign up to help take care of events.

“I see a lot of the names that usually are on [the sign up sheet,]” said Kissell. “I would really like to see more names on here. We need to make sure we get the word out.”

With the “Can Emporia” event, Taylor McGown, WSGA president, emphasized the need for everyone to keep publicizing the event. With Washburn having successfully beaten out rival school Emporia State University the last couple of years, WSGA is hoping to keep the pressure up as they work toward another successful year of fundraising and food collection.

The last notable announcement was that of Ryan Masilionis, WSGA senator, who announced his stepping down from his position with the organization. Masilionis recently was elected Delta Chi fraternity’s newest president and will be spending more time concentrating on his new position. He thanked his fellow senators for giving him a positive experience serving Washburn students.

The evening concluded with members in attendance sharing what they did over the winter break.

The next WSGA meeting is scheduled for Feb. 1 at 6:30 p.m. in the Kansas Room of the Memorial Union. The meeting is open to the public.