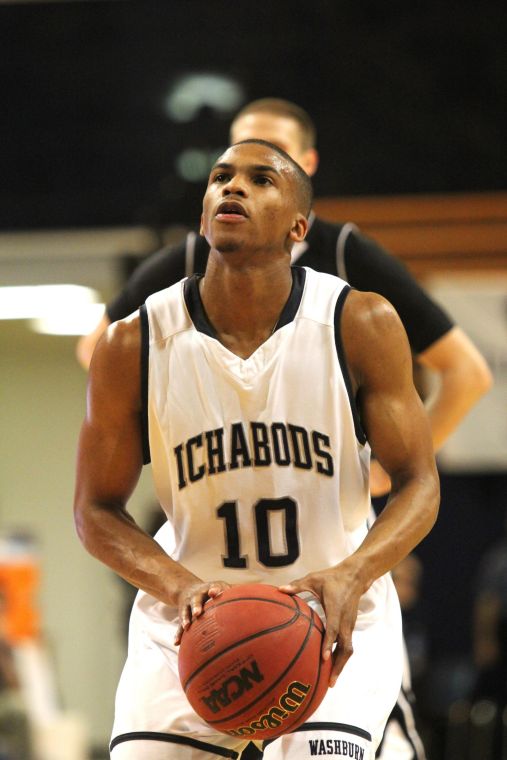 Will power Junior guard Will McNeill prepares to shoot a freethrow against Northwest Missouri State University. McNeill leads the team with 19.5 points per game.

With a team-leading scoring average of 19.5 points per game, junior team captain Will McNeill has stepped up his game this season.

“It was a long time ago,” said McNeill, “but I actually played for a D.A.R.E. [Drug Abuse Resistance Education]team.”

Then, while attending Peabody Magnet High School, McNeill was forced to make a decision that affected his entire career as an athlete.

“I was always told that I was better at football rather than basketball,” said McNeill, “and that was the decision I had to make going into high school.”

McNeill’s high school offered a prestigious sports program, to succeed in one, the athlete had to be completely dedicated.

“I ended up choosing basketball,” said McNeill. “I fully believe that it was the right choice.”

According to McNeill, his career at Washburn University to thanks to the man who recruited him during his senior year, Washburn’s previous assistant basketball coach, Ewan Auguste.

Auguste, two-time all-American and assistant coach to the Washburn Ichabods during the year of 2008, found McNeill while playing on the road with his high school team.

“I was playing basketball in Florida when he first started contacting me,” said McNeill.

McNeill stayed in contact with Auguste over the months and soon, McNeill signed with Washburn University.

“I had decided that I wanted to get away from home,” said McNeill. “As a momma’s boy, it seemed like a good chance to grow up.”

McNeill, still in contact with Auguste, says that Auguste was his mentor from the very beginning and still keeps contact with him.

“Auguste is currently working for IBM, but he still keeps up with Washburn athletics,” said McNeill.

Last year, McNeill experienced a pain that as an athlete, he refuses to let happen again.

“I broke my foot during the first practice last season,” said McNeill. “I had to watch a lot of games when I wanted to be able to come back in, it was hard for me.”

Though, with hard work and vigorous practices, McNeill prepared himself to return this season.