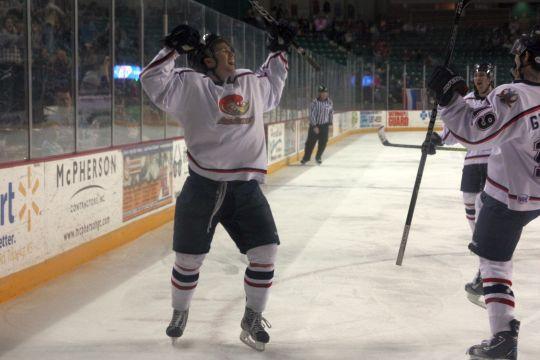 As a whole, it wasn’t the Topeka RoadRunners night offensively on Saturday.

O’Leary scored all five goals for the RoadRunners, including three in the third period, as Topeka (28-12-2) finished the weekend sweep of the New Mexico Mustangs, winning 5-1. With the goals, O’Leary doubled his goal total for the season, bringing it to 10.

Following his first goal at 16:53 of the first period, O’Leary felt he might have a special night. He ended the game with seven shots on goal, which was also miraculous, deeming that Topeka only had 19 shots on goal as a team.

“After the first shot I had, which was a goal, I felt like I had a hot stick,” said O’Leary. “I felt like I could put the puck where I wanted to. I just kept rolling and got more confident as the game went on.”

Topeka head coach Scott Langer said it’s hard for him to remember a player who had as monumental of a game as O’Leary did on Saturday. The player to score five goals for the RoadRunners was forward Andrew Johnson in December of 2004. The team was still located in Santa Fe, N.M. at that time.

“It couldn’t have happened to a better kid,” said Langer. “It was just unbelievable. It’s tough to get two, let alone five.”

Early in the second period, at 4:23, O’Leary scored to make it 2-0. At 14:29, defenseman Tate Rusk put New Mexico on the board, but that was as close as they came to tying the contest.

Despite only registering six shots on goal in the third period as a team, O’Leary was finish his hat trick at 6:22 when he snuck a wraparound shot past New Mexico goaltender Jake Stafford. At 9:27, O’Leary tried a similar move and was rewarded, as he scored his fourth goal of the night.

His fifth goal seemed to only come off the success O’Leary had been having all evening. He fired a seemingly dangerous wrist shot from the left point that found its way into the net.

“It was just an act of God, I think,” said O’Leary. “The puck just went on my stick and I threw it toward the net, hoping [James Ring] would get a tip. He had a nice screen and it just went right between the goalie’s legs.”

O’Leary had a chance for a sixth goal late in the game but narrowly missed.

Much of the third period success, according to Langer, was due to New Mexico (13-27-2) struggling to maintain the same intensity they played with early in the contest.

“In the first two periods, it looked like we just wanted to exchange rush for rush, and that’s not our game,” said Langer. “We refocused there in the third, and [New Mexico] spent most of the third turning pucks over to us, which helped our game because that’s usually how we play.”

In his first victory and complete game as a RoadRunner, Topeka goaltender Collin LeMay stopped 22 of 23 shots. In the loss, Stafford, who was pulled after the fifth goal and replaced with goaltender Randy Graham, stopped 12 of 17 shots.

Topeka looks to continue their recent success Wednesday and Thursday night as they face the Corpus Christi Ice Rays at 7:05 p.m. in Landon Arena. Parking will be free for both contests