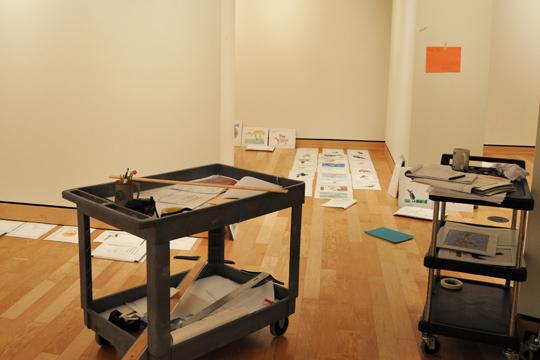 New Beginnings After closing down for roughly three months, the Mulvane Art Museum will reopen to the public Feb. 3. The renovations upgraded the temperature and humidity controls. The Museum will feature four new exhibits when it welcomes back visitors

After being closed almost three months for renovations, Washburn’s Mulvane Art Museum is finally being reopened to the public on Feb. 3, for the first Friday event of the month, with four new exhibits on display.

The Mulvane Art Museum, which is accredited with the American Association of Museums, underwent roughly $300,000 worth of renovations that needed to be made to pertain to certain conditions required by the association for the artwork owned and on loan. The main renovations that were made were changes to the temperature and humidity control.

“In a museum setting with a variety of mediums… there is concern for temperature, so damage isn’t caused,” said Carol Emert, curator of collections and exhibitions of the Mulvane.

“Temperature and humidity levels are very important to museums because if they are not maintained properly, damage can be caused to the artwork,” said Emert.

The temperature needs to be around a constant 70 degrees Fahrenheit, with no spiking up or down. “Humidity is important as well,” said Emert, “because too much or too little can cause damage.” Humidity levels should be around 40 percent. If humidity is too high, mold can grow on the paper and paintings, and if it’s too low, artwork can expand or become brittle.”

“It’s really important with borrowed art,” said Emert. “In fact, they ask for facility reports, telling them what we keep the temperature and humidity at.”

To help control humidity levels, a new boiler was installed, enabling the museum to produce steam all year round, instead of just during the winter.

“We will have the capacity to provide the correct environment for art, and our visitors,” said Cindi Morrison, director of the Mulvane Art Museum.

Morrison stated that a lot of the renovations that were made will not be seen in the museum, since much of it will be in piping above the ceiling tiles. Morrison also stated that they felt that winter break was the best time to start this project, since summer is typically the busiest season for the museum.

“We have a show coming from the Charles Shultz Museum in California,” said Morrison. “So we’re having a family friendly show…lots of art camps…lots of stuff going on…and we didn’t want to cancel that.”

Morrison expressed how important these renovations were to the museum, to keep it accredited with American Association of Museums.

“We’re extremely fortunate that the board of regents and Washburn believes how important this museum is to the university and the community,” said Morrison. “It’s showing how much we are a part of what happens here…for students and faculty and people of all ages.”