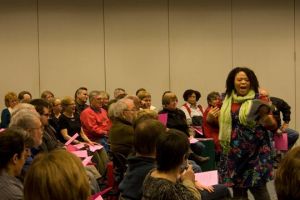 It is often said that waiting is the hardest part. The stress involved in anticipating confirmation or failure is almost enough to kill those stuck in the waiting limbo.

This culture behind waiting, specifically in a women’s health clinic, was expressed this past weekend in the one-act choreoplay “Tick Tock” written by Marcia Cebulska, with shows at the Topeka and Shawnee County Public Library and the YWCA.

“I think that most of us are waiting for something,” said Cebulska. “We’re waiting for life to happen in some way. The waiting room for me is also symbolic of our lives. Instead of creating the world we want, we wait for it to happen.”

Part of the inspiration for the play was Cebulska’s own time as a young woman in the 60s, a time of civil and social unrest with a strong desire for reform. Cebulska states that it was a time when revolution seemed to be a likely possibility.

According to Cebulska, not nearly as many female diseases are researched as male ones and that if the women in the play were men, their problems may have already been solved and cured.

“When I wrote this play, I wanted to think not only about the problems of the women waiting in the health clinic,” said Cebulska. “Taking this into their own hands and doing something together, going from being separate individuals in a corporate medical world, then finding something in common and showing that they don’t like what they have been subjected to.”

As a choreoplay, “Tick Tock” features dance routines that Cebulska described as celebratory and a way to express oneself.

“At the beginning, everyone is sitting in their own world,” said Cebulska. “They’re barely moving. The idea of going from immobility to mobility to dance, which is a bigger expression, is part of the idea.”

“Tick Tock” also sees the return home of Eleanor Goudie-Averill, daughter of Washburn writer-in-residence Tom Averill, as choreographer and dancer in Topeka for the first time in two years.

After graduating from Topeka High School, Goudie-Averill danced in Lawrence while attending the University of Kansas. She then sought her graduate degree in Iowa before dancing in New York before staking a claim in her current home of Philadelphia, PA.

Nonetheless, there is always a special place in Goudie-Averill’s heart for her hometown.

“I think there’s something special about growing up in Topeka,” said Goudie-Averill. “In some ways, there’s a lot going on here in pockets. You have to find them. In other ways, you really want to get out of here, which I think can be positive because it makes you go places.”