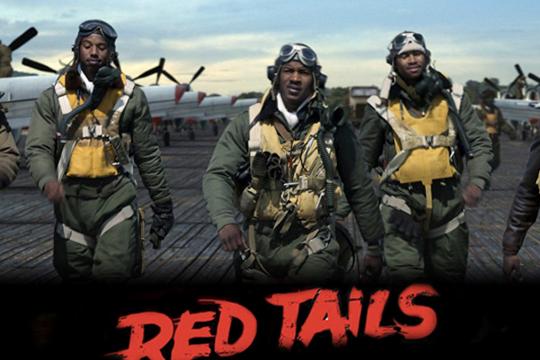 When one think of Lucasfilm, the only two movie series that really come to mind are “Star Wars” and “Indiana Jones” because there really have not been too many others.

The film opens up with an air battle with the U.S. against the German Nazis.  The U.S. struggles, with planes and bombers constantly getting destroyed.

Next we see four African American pilots flying around bored out of their minds because even though through the Tuskegee program they are able to fly for the U.S. military their assignments don’t give them a chance to be part of the action.  They find themselves looking for enemy trucks or trains on the ground.

The Pentagon, desperate to protect their number of bombers being taken out, they decide to let the Tuskegee Airmen have the chance to be a part of the action and prove they are worthy in battle.  Their mission is to protect the bombers as they go to their destinations.  At the time it is believed that African Americans are too stupid to fly and do what the White man can do.  They prove everyone wrong, when on their first real mission they succeed in protecting the U.S. bombers and there are only one or two casualties.

The inside conflict of the movie involves Marty Julian “Easy,” played by Nate Parkerand Joe Little “Lightning,” played by David Oyelowo.  “Easy” is the air captain of the Tuskegee Airmen and has a problem with drinking while “Lightning” has a problem following orders and is always looking for a way to get him killed.  “Easy’s” drinking problem seems to stem from his father never being proud of him, though this is only mentioned briefly in the film and we don’t get too much of a back story on the relationship between Julian and his father.  “Lightning” brings on the romantic side of the film as well when he meets an Italian girl nearby named Sofia, played by Daniela Ruah.  Even though the two don’t speak the same language they are still able to fall in love.

Overall I was impressed with “Red Tails.”  It kept you on the edge of your seat at each battle.  I was not looking forward to sitting and watching a World War II film for two hours but there wasn’t a second that I was looking around bored.  Though some of the scenes in the movie seem underdeveloped like when one of the African American pilots get captured by Nazi forces and then we see him be put in the prison, then the next time we see him he is escaping with other U.S. prisoners.  There is that typical shot of the American flag waving on the screen with the National Anthem playing in the background and Gooding Jr. with a pipe just looks hysterical.

Visually the film was spectacular, the sounds of the planes, the explosions, everything felt so real.  I strongly recommend not waiting and going to see this movie.  You will laugh, cheer and maybe even cry but in the end you leave with a smile at the historical epic story that has been unfolded in front of you.