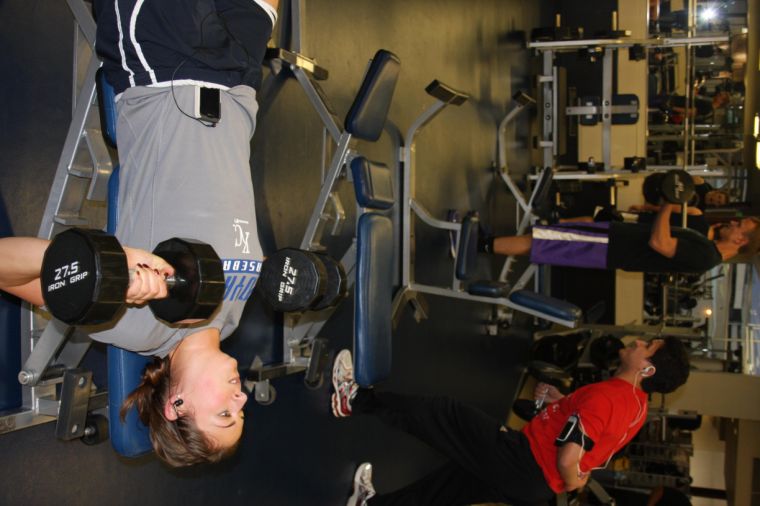 Pump it up Senior Courtney Wallman performs some pectoral exercises at the Student Recreational and Wellness Center. The SRWC offers several group exercises, including Zumba. They are also planning a Spring Break Boot Camp and mini-triathlon.

With a fresh batch of new treadmills from last semester, the Student Recreation and Wellness Center at Washburn has been working hard in preparation for the spring.

While most of the work has been done internally for the staff to better communicate with student workers, Joe Bluml, director of the SRWC has some new changes to entice students into improving their wellness.

For instance, similar to WU’s Most Fit in the fall, the SRWC will hold a mini-triathlon on bicycles, treadmills and ellipticals on a time scheduled by the student.

“You’ll schedule a time because we can’t monopolize a bunch of equipment,” said Bluml. “Instead of how far can you go within this much time, it’s going to be how fast can you get these distances done.”

While the mini-triathlon may be a new addition, Bluml feels content sticking with many of the same group exercise classes as last semester since they proved so popular.

“We had some classes where we actually reached our limit,” said Bluml. “Some people couldn’t even take them because so many people were coming, which is a great problem to have.”

Because of students’ schedules often shifting, Bluml believes that though classes may seem old to regulars, students with new openings in their schedule may try classes for the first time.

The classics like yoga, cycling and pilates are all being offered. The most widespread class from last semester Zumba aerobic dancing will also remain offered with more space added because of its popularity.

“We’ve moved Zumba out onto Court 3 in the gym because we’ve had upwards of 40 people taking that class,” said Bluml.

While intramurals had its cutoff for registration, the SRWC is offering a late registration for its most popular sport basketball by 5 p.m. tonight for new students and those who did not participate.

According to Ben Saathoff, assistant director of fitness and wellness, the biggest change to the SRWC in this semester is their Spring Break Boot Camp with registration opening soon.

“Instead of a group exercise class where you can come and drop in at any given time, this’ll be something we take registrations for, like a class roster,” said Saathoff. “It’s meant that you’re at least at the intermediate level to start and then to challenge you and be progressive throughout the semester, kind of culminating before Spring Break.”

For students to maintain enrollment in the class, participants are required to attend two to three classes per week. To boost morale, a networking system is being implemented into the class.

“We’re trying to collect people’s cell phone numbers and create a group where they can support one another,” said Saathoff.

For more information on the SRWC, call 670-1314 or email [email protected]