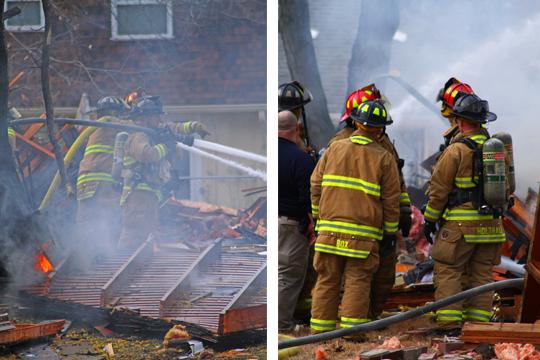 Under Fire Firemen fight the blaze that consumes a house at the 1900 block of S.W. Navajo Road. The fire was caused by a natural gas explosion on Monday morning. Lucinia Tolliver, 81, was at home when the exposion shook her house. She was in serious condition and airlifted to The University of Kansas Medical Center in Kansas City, Kan. She was in stable condition as of Monday evening.

Shortly before noon a house exploded at 1905 Navajo Lane in West Topeka. A construction crew was installing a water sprinkling system in the yard of the house next door when they hit a gas line. The ruptured gas line led to an explosion that leveled the house next door and knocked out some windows in the house across the street. One woman was home at the time of the blast. She was flown to a Kansas City hospital where she is in critical condition.