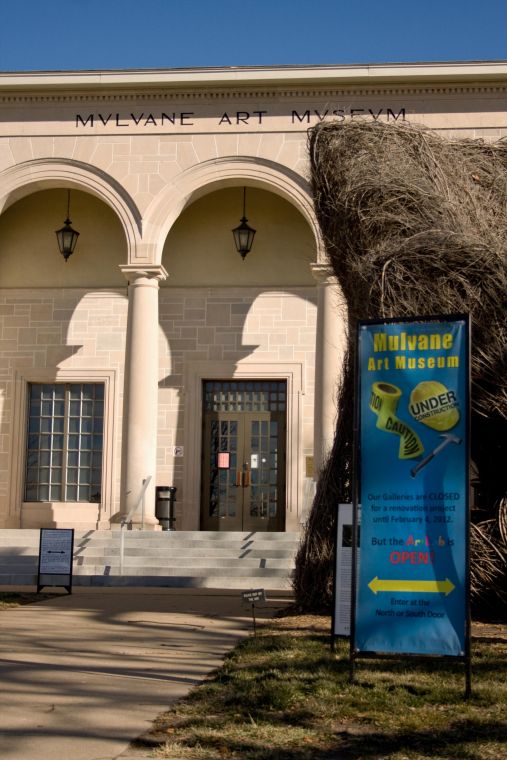 Artful Reopening The Mulvane Art Museum is making final preparations for reopening. The Mulvane has been closed since the end of the fall semester. The improvements include climate control equipment that will bring Mulvane in line with standards for museums.

With the reopening of Washburn’s Mulvane Art Museum comes four exciting new exhibits which will be on public display on the First Friday Art Walk on Feb. 3, from 5 p.m. to 8 p.m. These four exhibits are coming after the museum’s three-month hiatus due to renovations to the museum.

Both show rooms of the first floor of the museum will display “Parallel Views,” a dual showing of the geometric works from Argentinean artists, Miguel Angel Giovanetti and Fernando Pezzino, who is also a professor at Washburn.

Giovanetti, from Buenos Aires, Argentina, will be showing paintings from his “Open Shapes and Ovals” series. Giovanetti, who has been creating art for over 30 years, says that his inspiration for his work in the “Open Shapes and Ovals” series comes from the futurist vests of the artist Fortunato Depero, seen in Italy during the first part of the 20th century. His interpretations of these vests come together abstractly as bright colors and geometric shapes. His oval series parallels the other series in terms of geometric composition.

This is the first show that Giovanetti has done with one of his own students, Pezzino. Giovanetti serves as a mentor to Pezzino, and they have been working together since 2009. The two kept in contact weekly through Skype, where Giovanetti could see Pezzino’s work through computer webcam and offer suggestions and guidance for his new project.

Fernando Pezzino has been an instructor in the department of modern languages at Washburn, teaching Spanish courses since 2008, but many of his students are unaware that he is also an artist.

Pezzino will be showing selections from his “Cultural Fragments” series, which consists of 11 of 15 acrylic paintings on canvas, depicting his concepts of communication and Spanish culture. Pezzino conveys the message of each piece through the construction of geometric figures mixed with the use of crossword puzzles.

In this way, Pezzino is able to express the concept of communication without plainly stating it through interaction with those who see the paintings. At the same time, he is able to tie in fragments of Spanish culture into his work, with each painting representing a Spanish speaking country. This work also represents his life here at the university.

“There is a strong connection between what I do at Washburn…with language and culture,” said Pezzino.

“She collects items that would normally be in the trash,” said director of the Mulvane Art Museum, Cindi Morrison, “and then makes these wonderful moths.”

The large, elaborate renditions of moths and lichen found in Stitzlein’s own garden are composed of anything such as old Ohio license plates, piano keys, shower knobs, vintage bicycle seats, and much more.

Stitzlein will be visiting Topeka and Washburn in March, first to help build a mural made entirely of bottle caps on the wall outside the Mulvane Art lab, and then to help with a Bottle Cap Family and Community Day event at the Art lab, in which she will be helping kids make their own bottle cap art.

Also on the second floor is an origami exhibit by Robert J. Lang of Alamo, California. The title of the exhibit, Ichi-mai Ori, is Japanese for single sheet origami. The paper sculptures are extremely detailed and realistic, ranging from animals like herons, otters, and life-like tarantulas, to flowers and intrinsic designs, each individual piece made from one uncut sheet of origami paper.

“We do have a couple books of his, and it’s as hard as it looks,” said Morrison.

The fourth exhibit to be shown on Feb. 3 is titled Twist & Turn, and is made up of around 1,400 paintings, drawings, and mobiles of Kansas birds made by hundreds of Topeka citizens, ranging from children in elementary school to the elderly in art classes. This project was made possible by a grant from the National Endowment for the Art’s Art Education Invitational Grants Initiative. After the show is over, the artwork will be redistributed back to the kids and adults that made them.

“What you see here is what happens when you send an arts educator to a classroom,” said Morrison.