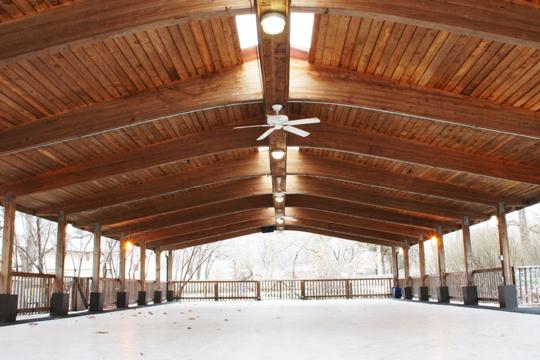 Polar Ice Cap The Topeka Zoo has reopened it’s synthetic skating rink to Topekans. The zoo is encouraging people to bring their birthday parties and special occasions to the rink. It will only be open until the end of February, and is of no extra cost during the daytime hours.

The Topeka Zoo, in the heart of Gage Park, is expecting an exciting new addition to its inhabitants early this May. What new addition is that? Penguins.

According to Sara Hall, the Topeka Zoo’s marketing assistant, the penguin exhibit, also entitled “The Penguin Plunge,” will officially be open to the public on May 10 and will be open until September.

The exhibit will be enclosed for the penguins’ comfort and as a benefit to the public.

“It will be regulated and the exhibit will also feature a lot of educational, interactive stations,” said Hall.

The Topeka Zoo was prompted to give the community something it’s never had before.

“With the exhibit actually being a traveling exhibit, it just worked out,” said Hall. “We’ve never had penguins, so we had to seize the opportunity.”

According to Hall, traveling exhibits are a good way to increase attendance and awareness.

“Penguins are fun, too,” said Hall. “We wanted to get something people would like.”

The Topeka Zoo also has reopened its second annual ice skating rink, “The Polar Ice Cap,” for the public.

The only additional cost to use the ice skating rink is $2 for skate rentals. The zoo encourages visitors to bring their own.

The ice rink is simple for the staff members of the Topeka Zoo to maintain.

“It’s almost like a plastic cutting board,” said Hall, “We don’t have to keep it refrigerated.”

Also, according to Hall, the most enticing aspect of the ice skating rink is the talent that comes with the skaters.

“We have a wide range of skaters from those who know what they’re doing and those who don’t,” said Hall. “We saw a lot of people last year who could definitely ice skate.”

Groups are encouraged to come out and use the rink for birthday parties or any special occasions, especially this upcoming Valentines Day.

“This year, it’s become a lot more popular because people know more about it,” said Hall. “It’s still new, but it’s more popular, which is great.”

The Polar Ice Cap is open every day that the zoo is open: Mon. through Sun. 9 a.m. – 4:30 p.m., and it’s also open every Saturday night throughout February.