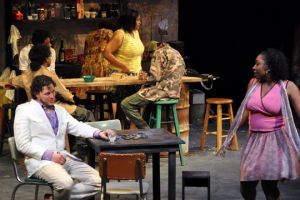 “Ruined” was a little longer than expected, but it definitely surpassed my expectations of the quality of performance.

Before the performance began, I was greeted to the fullest audience I’ve seen at a Washburn theatre production.  The set of the play intrigued me.  It appeared as a bar scene, a couple tables out front, and some makeshift beds in the very front.

The majority of the actors were absolutely great. They stayed in character, and ran through their lines with a powerful intensity.  The subject matter was heavy, but some crude humor offset the heaviness.

The language and themes definitely wouldn’t be for all, but I think it was honest and real dialogue.  It may have been the most controversial play I’ve seen, but I think that it’s importance overall was great.  It was a way of seeing another world that in some places, is still happening now.

One downside the play was that it was right around an hour and a half for the intermission between acts one and two.  I didn’t remember hearing anything about the play being so long and I could see other audience members growing restless.  Nevertheless, after a quick stretch of the arms and legs I was ready for the second half to begin.

Even with all of the conflict the girls had been through, Mama Nadi’s place was meant to be a safe place for them, a place that would be better than fending for themselves.  In Act II, you began to wonder just how safe this place could be.  With soldiers from both sides in and out, they started to second guess Mama Nadi’s motives.

In the climax, soldiers confront Mama Nadi’s and one of the characters, Salima, doesn’t make it out alive.

The ending did it’s best to try and lift the heavy mood, but I’m not much for love stories. I was happy with the ending though because it didn’t try to mask the issues, or show that everything was going to work out and give an absolute happiness. It showed that the issues were still there, you may not know how girl‘s lives will play out, but that there can be happiness even for those who are “ruined.”