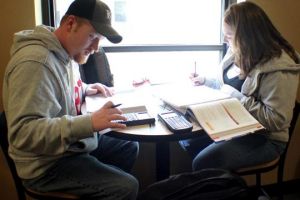 Over the past couple weeks, local media and social networks have been buzzing with the stories of Topeka Mayor Bill Bunten suggesting the ban of wearing hooded sweatshirts and baseball caps inside of businesses throughout the city.

In response to the waves of crime seen through out recent months, the mayor and the city council met to discuss ways to deter criminal behavior in the city. The mayor put forth 22 new ideas, with the ban on hooded sweatshirts and ball caps being one of those.

Hooded sweatshirts, more popularly known as hoodies, are undoubtedly one of the most popular winter wear items and are quite commonly seen being worn in public, especially on Washburn’s campus. Although a comfortable and warm accessory, hoodies are being used again and again to hide the faces of criminals from security cameras during robberies of local convenience stores and gas stations.

“The issue of crime in Topeka is not one solved by attire,” said Chad Manspeaker, a 6th District Topeka City councilman, representing the Washburn district. “Poverty is the real root of the issue.”

The ban suggestion did not sit right with Manspeaker, who stated he is “a big fan of hoodies.” Being a union organizer for companies such as Westar and Kansas Gas, he also stated that he felt the suggested ban was a bit classist against people who work for a living, since many outdoor workers wear hoodies as part of their uniform.

Manspeaker, who graduated from Washburn University in 2002 with a degree in political science, was present at the council meeting where Mayor Bunten suggested the ban. Councilman Manspeaker was quick to show his disapproval, speaking his mind about the issue via Twitter. Manspeaker’s tweets about the hoodie ban sparked an online frenzy, and he was soon contacted from five news agencies wanting more details.

“The reason this is a story is because I wouldn’t shut my mouth about it,” said Manspeaker.

Over the following days, Manspeaker continued to tweet about the hoodie ban, and many other Topekans joined in. Friday, Feb. 3 was then dubbed “Hoodie Friday” by numerous Twitter users, even some from out of state, as they posted tweets and pictures of themselves in hoodies with the hashtag “#hoodiefriday” to show their opposition of the suggested ban.

Bunten cannot pass the ban as a city ordinance because he does not have a vote; only the city council can pass policy. Since the council was so disproving of the suggestion, it is unlikely that the ban will get any farther than a suggestion.

It wasn’t just Bunten who supported the ban, however. The suggestion was first offered to the mayor by Ron Miller, chief of the Topeka Police Department, who stated that the stories buzzing in the media were slightly misconstrued.

“This is a crime prevention strategy,” said Miller. “This is not a ban on wearing hooded sweatshirts.”

Miller said that the stories involving the ban somehow got warped from what he really had suggested. Miller said that the suggested ban would have been against the wearing the hood of the sweatshirt only, not the sweatshirt itself, inside of local businesses such as convenience stores, gas stations and liquor stores. He also stated that this ban was not designed for ball caps, but stocking caps that covered the face, as well.

“The request is the removal of the hooded part from the head,” said Miller.

The ban would be mandated in only those stores that are easy targets for robberies. Miller said that several businesses around Topeka already have administrative rules and signs posted that customers must remove hoods and hats before entering the building.

“It isn’t a question of wearing it at school, in your car or other public places,” said Miller.

The problem with administrative rules that businesses post, says Miller, is that the police cannot enforce them. If the suggested ban of hoods were actually put into city ordinance, then the police could then enforce those rules by surveying any stores notorious for being robbed and stop and question anyone who entered and refused to remove his or her hood. This would result in the surefire deterrent against premeditated robberies.

Miller also mentioned some recent robberies that had taken place in Topeka, including the killing of the liquor store clerk that occurred on Christmas Eve. The criminal who committed the robbery and murder was not wearing a hoodie but a stocking cap.