Tegan and Sara ‘get along’ 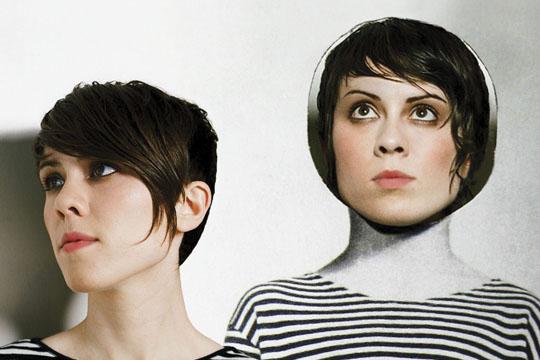 Getting along Tegan and Sara, Canadian twins released their new album, “Get Along” with a sense of relaxation in a hectic world.

Tegan and Sara is a band featuring identical sisters, Tegan Quin and Sara Quin. Though it may not be a name you hear locally, this Canadian indie band is worth a listen. Their style consists of a smooth variation of keyboard, guitar and vocal sounds.

The women were born on September 19, 1980. They are also both openly homosexual, starting with Sara’s “coming out” at age 15. Sara’s sexuality tends to be portrayed in her becoming as a songwriter.

Tegan and Sara began playing guitar and singing at the age of 15. In 1997, they recorded two demo albums entitled “Who’s in Your Band” and “Play Day”. At this time, they were making albums through their schools recording studio.

Since then, they have been signed to Neil Young’s Vapor Records in Canada and also to a United States recording label titled Sire. They have appeared on the cover of many top magazines, including Spin, Exclaim, Curve, EQ and Alternative Press.

In 2004, their album titled “So Jealous” was on the 50 best albums of the year list by Rolling Stone magazine. They have been nominated best alternative album of the year on numerous occasions through many award competitions.

Needless to say, the lack of people who know about Tegan and Sara is absolutely astonishing for the achievements and progression they have made. If you have ever listened to The White Stripes and heard the song “Walking With a Ghost”, you have heard a Tegan and Sara original.  Alkaline Trio has also covered a Tegan and Sara song entitled “Wake Up Exhausted.”

If you have ever heard the sounds of Dido and liked it, you can imagine the style you get from an album by Tegan and Sara. These two artists replicate each other in many ways, though Tegan and Sara definitely have their own personalities that set them apart. For example, they usually steer toward the aspect of happiness in life rather than the humility of life.

Tegan and Sara’s newest album is entitled “Get Along” and features 15 new hit tracks. Though many of the songs talk of the generic problems of life, they also offer empowerment in these issues and a sense of relaxation in a hectic world.

After the hectic days that come with college life, “Get Along” is surely an album to come home and relax to. You can even check out the short films available as an addition in the live album.