Smith gets fresh start with Washburn 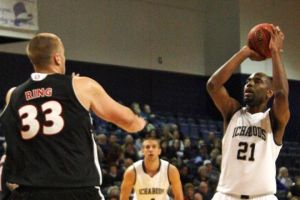 Smith, a native of Memphis, Tenn., began playing the game at a young age.

“I was probably 6 or 7 when I first played on a community center team,” said Smith. “I was playing with the Whitehaven Broncos.”

“Personally, my dislike for Arkansas Tech is what made me decide to transfer to Washburn,” said Smith.

Smith then had to sit out as a redshirt for a year after transferring, but he became eligible this season.

“I’m enjoying every minute of it,” said Smith.

According to Smith, his one and only position is and always will be forward.

“I’ve always been a forward,” said Smith. “I try to be a guard, but that gets me into trouble with my coaches and my teammates.”

Smith then added in a joking manner that junior guards Will McNeil and Martin Mitchell should watch out.

So far, though, Coach Chipman has Smith playing as a forward and that’s where Smith is the most comfortable.

“Coach is very knowledgeable and he is a proven winner,” said Smith. “I’m just grateful for the opportunity that I’ve been given to be taught by him and both Coach Brown and Nocito.”

Having traveled amongst schools in the past, Smith said he is at home in the Washburn community.

“I’ve enjoyed Washburn a lot,” said Smith. “It’s a bit different than where I’m from, coming from a big city and all, but I’ve met a lot of good people here and have built some friendships that I think I’ll hold onto after my time here is said and done.”

Smith’s favorite aspect on being a Washburn Ichabod is his teammates.

“We’re a close-knit group of guys,” said Smith, “we all get along really well, and it’s been fun to be able to build relationships with guys like we have this year.”

According to Smith, the differences in the boys home towns has aided in bringing them closer together.

“We’re like a real family, ” said Smith, “I can’t think of any other guys I’d want to go to war with on the court every week.”