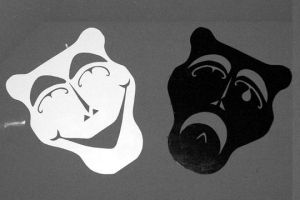 “Murder Most Paranormal” premiered at the Break Room, starting the moment the audience walked in. Cast members intermingled with guests, leaving subtle clues and their unique personalities. Doors open at 6 p.m., guests should arrive by 6:30 at the latest.

“The earlier you arrive, the more clues and hints you get throughout the production,” said Chris Shultz, manager of the Break Room.

“Murder Most Paranormal” was written exclusively for the Break Room by Lynn Burks, working with director Vicki Trembly. It is based on the fictional history of the building in which the Break Room is currently in.

“I really enjoy the relationship and interaction,” said Burks.

Burks has been writing murder mysteries for 10 years. Two of her plays were “Bella Donna in the Booya Bays,” and “Conga Without Tonga.” She is currently writing her fourth screenplay, “Death to Claude,” which will be performed during April and May 2012 in the Florentine Room of the Jayhawk Theatre.

Trembly has directed other murder mystery performances, starting two years ago at the New City Cafe on Huntoon and Gage.

“I seem to poison a lot of people in my murders,” said Trembly. She is also the host of “So You Think You’re Funny” on First Fridays at the Break Room.

Shultz plays himself in the Arts and Entertainment version of a paranormal murder mystery, complete with two fake mediums to get rid of a ghost, Fat Gerdie, played by Trembly. Other distinctive characters were “Crazy” Delores Delarosa, Tepid Moonstone, Madam Sonestria, Al Studebaker, William R. Tate III, and Charmaine Testosterone.

Sometime during the performance, someone is murdered, and an investigator, Dagmar Bromide, is brought in to investigate. It’s then up to the audience to guess who did it.

Dinner starts with a choice of a house salad, or Italian Wedding soup. Breadsticks were served with a choice of two entrees, beef lasagna or chicken portabella mushroom ravioli. Drinks and dessert were separate.