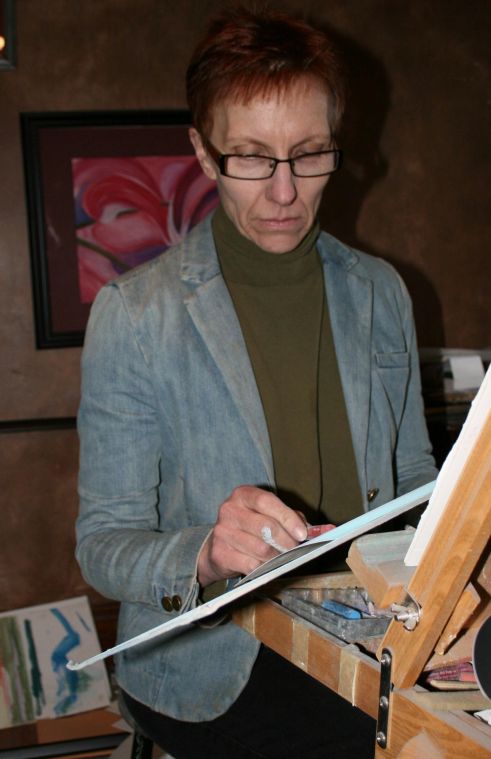 Waiting for the sun Wagner works out of her second floor balcony on one of her more than 19,000 sunset paintings. Wagner began painting after her recovery from brain cancer.

Life as an artist is meant to be nothing more than one of complete passion. Although, what happens when life gets in the way of that passion? As local artist Debbie Wagner put it—one must simply start over.

Wagner, from Bennington, Kan., is a loving mother of three children: Audrey, Grant and Melissa.

In the time before her surgeries, Wagner was an avid reader and a doting wife, but life unexpectedly changed everything in 2002 and she was diagnosed with two pear-sized brain tumors. Months later, Wagner underwent surgery, once in September and then again in October.

Wagner’s husband, Don, was by her side throughout the entire ordeal. This year will be their 30th anniversary.

“Life throws curve balls sometimes, and even though we have experienced some trauma, the stories Deb has received along with the request for her sunrises have shown us how lucky we have been to be able to have a life together without tragedy,” said Don Wagner.

Debbie Wagner says that upon recovery, she recovered an old part of herself.

“I woke up one morning in the early December of 2005, looked out the window and just was in awe of just how beautiful the sunrise truly was,” said Debbie Wagner.

Wagner decided that, because of her loss in the ability to read full novels, balance a checkbook, and sleep throughout an entire night, she would instead begin a new diary—a diary of sunsets.

That diary, as Wagner has described, now consists of an estimated 19,000 sunset pastel painting. One for almost every day since she recovered from her surgeries.

Years later, Wagner was still waking every morning to the vibrant colors of the sunrise and a gallery in Salina took notice.

“They contacted me and wanted to do a show on my sunrises, so I picked three sunrises from each season,” said Debbie Wagner.

She then matted and framed each sunrise and submitted the 12 that represented the year of 2006.

“I hadn’t realized how the sunrise was moving back and forth along the horizon,” said Debbie Wagner. “It was just beautiful.”

When Wagner was first approached about the sale and purchase of her sunrises, she was welcoming.

“People have asked me ‘how can you sell these?’ and I’m like, ‘Why would I keep them?'” said Debbie Wagner. “I’ve gotten my benefit by creating the sunset, once I’ve done that, it’s done what its needed for me.”

However, with time, Wagner’s greatest assurance in her sunrises was the stories she was graced with.

“My story is finished for the day with every new sunrise that I create,” said Debbie Wagner.

When someone wishes to purchase one of her sunrises, Wagner describes the transaction as the sunrise becoming a new story—whether it be a wedding or a burial.

“There’s just too many reasons people would want them,” said Debbie Wagner. “It changes the meaning for me every time as lives merge together, it’s how life goes on.”

A sunrise takes on a different meaning for everybody.

With Wagner’s recent publicity and success these past few months (MSNBC, The Today Show and Hatteberg’s People) her optimism for the future only grows with time.

“It’s an honor and its humbling, but it is also a great responsibility,” said Debbie Wagner.

With Wagner’s heartfelt story of surviving her brain tumors inspiring hundreds, Wagner feels a responsibility to respond to each and every request, email or thank you note she receives. She currently spends a portion of  the day dedicating her time to trying to respond to as many voices as she can.

To Wagner, a woman whose time and dedication to a diary she started in the wake of her recovery has inspired many, such a simple act has become a daily routine.

“I never think ‘should I do this?’ I just need to,” said Wagner. “If I have a busy day and can’t accomplish any other kind of art, at least I know that I’ve accomplished my sunrise.”